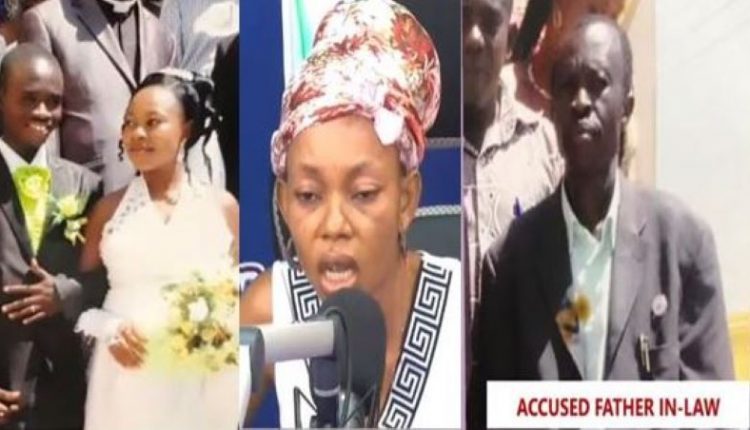 Sandra Beweh, a resident of Effiduase in the Ashanti region, has been paralyzed and has accused her father-in-law, Kwame Aboagye, of being behind her sickness.

Sandra, who appeared on Oyerepa Afutuo, disclosed that her father-in-law started the problems the very first day she got married to Isaac Aboagye, the son of Kingsley Aboagye (Apostolic Church Presiding Elder).

“My father-in-law demanded transportation fees after our wedding, but my husband directed him to borrow so as to pay back later.

After a week, my husband’s brother called and implied that his father had gone naked. He did that to curse my husband. He told my husband to leave because his father, Kwame Aboagye was coming to our house to kill him.” According to Sandra.

“My father-in-law entered our house and asked for my husband. By that time, he had left. He asked me to pass a message to my husband that he will deal with him. He will fry him like a chicken and will let him be paralyzed; he’ll let my husband walk on his knees (crawl).” Sandra stated.

She further revealed that “when my husband returned, I asked him what he had done to his father that he was threatening to kill him but my husband denied doing wrong.”

According to Sandra, she informed her church elders to plead with her father-in-law but he never accepted.

“I informed my church elders to go and plead on behalf of my husband. When they went there, he (Elder Aboagye) didn’t listen to them; he demanded my presence before he would listen to them.

The following week, I went with them. However it never worked, he even stressed about killing my husband. He then disclosed that he had cursed his son.” She explained.

She lamented that her father-in-law gave her husband water to drink. Since then, her husband changed; he began beating her.

She added that “I woke up one morning slurring. I went to the hospital, but they said nothing was wrong with me, but I knew I was not well. One day, my father-in-law called and told me that he is behind my sickness.”

“I got paralyzed three weeks after giving birth. I couldn’t do anything. I approached Elder Aboagye and he told me right in my face that, he was behind my afflictions. He said he wasn’t in support of our marriage because ‘I’m too beautiful for his son.”

In fact, I’ve suffered a lot, I need some help and healings.” Sandra sorrowfully stated.