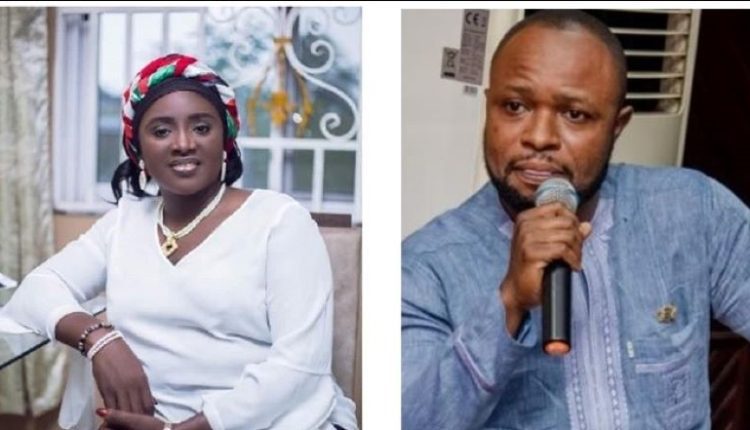 Dr Hannah Bissiw, the National Women’s Organizer of the National Democratic Congress (NDC) has lashed out at Collins Owusu Amankwa, the former member of Parliament for Manhyia North for seeking to pit Akans against the NDC with his viewpoint that the party deliberately excluded Akans in the composition of its newly-formed National Executive Committee.

Hannah Bissiw reckons the former lawmaker might going through some mental challenges and that could be the reason behind what she estimates to be a very reckless statement.

Hannah Bissiw stated that the current NDC NEC was inspired by God as it is composed of representatives from almost every part of the country.

“God should forgive him. I’m sure he still suffering from the slap he received from Chairman Wontumi. Our party is not like theirs. If he wasn’t suffering from that slap, he wouldn’t have made that statement. I’m descendant of Donkor not Bassari. He should be careful. I love the Bassari people but I’m proud to be a Dagaba. I’m from a generation of slaves.

“God carefully chose this crop of NDC leaders for us. We didn’t plan anything, God has his plan so we thank God. I don’t think it was about regional balance and I’m not sure, that was the motive of the delegates. Some contestants lost in regions that hail from so clearly we didn’t plan anything,” she said on Okay FM.

Collins Owusu Amankwa made the statement on the same Okay FM platform during an interview on the 10TH National Delegates Congress of the NDC.

The Congress produced some interesting results, marking the end of Samuel Ofosu-Ampofo as the national chair of the party and the elevation of Johnson Asiedu Nketiah from General Secretary to chair.

Joshua Akamba suffered same fate as Ofosu-Ampofo as his National Organizer role has been taken over by Joseph Yamin.

Parliament approves 2.5% VAT increase by a headcount of 136 against 135