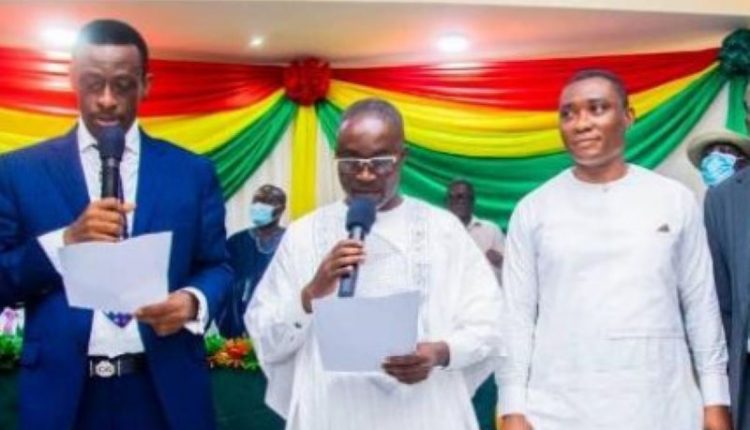 The Dompim-Pepesa Chief has alleged that the Western Regional Minister, Kwabena Okyere Darko-Mensah, Deputy Lands Minister George Mireku Duker, and the Tarkwa-Nsuaem Chief Executive, Benjamin Kessie, are behind illegal mining in the area.

Nana Nyonwah Panyin IV said he has incontrovertible evidence of their involvement in the activity in the area.

As a result, he has dared them to sue him if they believe he is damaging their reputation without proof.

Speaking on the Joy FM Super Morning Show, on October 10, he told host Kojo Yankson that he will do whatever possible within his means to ensure the canker is stopped within his jurisdiction.

According to Nana Nyonwah Panyin IV, he has received several threats for his stance but he is unfazed.

“I know not of any company but I know of the very people who are behind the operations of ‘galamsey’ in my area. First and foremost the Regional Minister, Kwabena Okyere Darko-Mensah is involved.

The MP for the area, Tarkwa Nsuaem, Honorable George Mireku-Duker is also involved and the MCE, Benjamin Kessie is also involved. I have told you I am not going to disclose my arsenals to you.”

“They said they were going to sue, so let them sue. I’ll let out my arsenals at the right time,” he alleged.

When quizzed about how he feels about the effect of the canker within his jurisdiction, he said he is heartbroken.

“The situation keeps getting worse, and my heart is bleeding,” he stated.

Be impartial – Mahama to Judiciary; urges EC and media to be independent