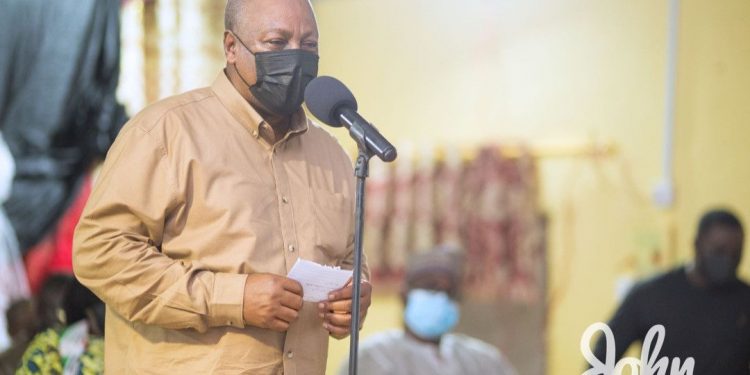 Former President John Dramani Mahama is hopeful that the new Special Prosecutor, Kissi Adjebeng, will deal with corruption in the country.

John Dramani Mahama has constantly accused President Nana Addo Dankwa Akufo-Addo of being unable to deal with corrupt officials in his government.

Speaking on Koforidua-based Sunrise FM during his thank-you tour of the Eastern Region, the former president said he is hopeful the newly appointed Special Prosecutor, will discharge his duties in the interest of Ghanaians.

“If President Akufo-Addo keeps exonerating his appointees engaged in corruption, the act will never stop. The government must take steps to stem corruption in the country. We have a new Special Prosecutor. Looking at how he has started his work, we are all hopeful that he will fight corruption…and all of us will support him to do his work.”

Touching on the increasing spate of robberies in the country, John Dramani Mahama attributed the situation to economic hardship.

“Prices of goods are currently expensive at the market. If Ghanaians are asked if the country is heading in the right direction, they will say no. Unemployment has worsened. The youth graduate from tertiary institutions over the years without jobs, and that has led to armed robbery and insecurity in the country.”

I will suppress and repress corruption – Kissi  Agyebeng

While being sworn in at the Jubilee House, Ghana’s new Special Prosecutor, Kissi Agyebeng, assured President Nana Addo Dankwa Akufo-Addo and Ghanaians that he will do his best to “suppress and repress corruption” in the country.

He said the country is currently plagued with two pandemics; COVID-19 and corruption, and promised that he will attach the same seriousness the government has attached to dealing with the COVID-19 pandemic in his work.

The 43-year-old is currently the second person to serve in the office after Mr. Martin Amidu resigned from the position in November 2020 citing interferences in his work.

Mr. Agyebeng was unanimously approved by Parliament on Friday, July 30, 2021, after his vetting.

During his vetting, he also said he has no intentions of resorting to the strategies of his predecessor, Martin Amidu used in fighting corruption in Ghana.

He said he will rely on his own experiences and professional training to effectively deliver on his mandate as a Special Prosecutor.