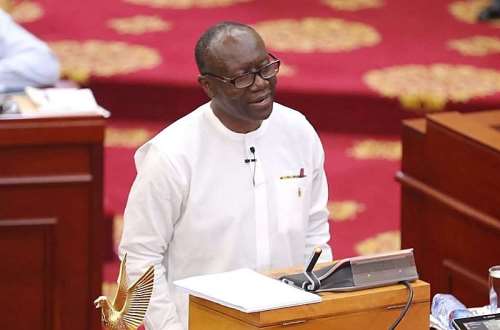 We’ll continue consultations with minority, others on E-levy – Ofori Atta

The Minister for Finance, Ken Ofori-Atta, says the government will continue engagements with the minority in parliament and other stakeholders including mobile network operators in getting the proposed e-levy approved.

According to him, the levy has a significant impact on Ghana’s fiscal situation, hence the need to ensure consensus on it.

Addressing the media on Monday, Ken Ofori-Atta said, “having regard to its serious fiscal implications, we will continue our consultation with the minority caucus in parliament and other relevant stakeholders with the view to achieving consensus and reverting to the house in the shortest possible time.”

The Minister said the tax to GDP ratio in Ghana is one of the lowest on the continent, and that there is a need to improve upon it to bring it to par with the average ratio on the continent.

He noted that the e-levy is the country’s best bet to increase its tax base and help to meet the average tax to GDP ratio on the continent.

“E-levy represents our greatest opportunity to in the medium term broaden the tax base and meet the tax to GDP ratio of 20% as pertains to our peers.”

“We shall also ensure that measures will be taken to avoid attempts at evading the e-levy taxes. The proposed e-levy tax is largely progressive, and we have intentionally set the GHS 100 threshold covering about 40% of MoMo users, mindful of the need to exempt vulnerable groups while continuing to encourage the development of our nascent digital economy,” Ken Ofori-Atta said.

The 1.75% tax on all digital financial transactions; E-levy, is one of the main proposals of the government in the 2022 budget presented to parliament by the Finance Minister, Ken Ofori-Atta last week.

The tax has since been met with mixed reactions, with Ghanaians kicking against it and stressing that it will only place an extra burden on their finances.

The minority in parliament has announced that it will not support approval for the proposal.