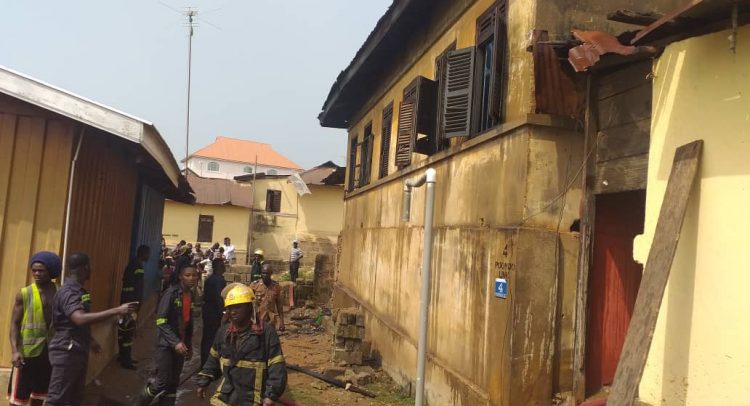 A six-room apartment located at the back of the Total Filling Station, near the Suhum Main Market in the Eastern Region, has been completely razed down.

The fire which started around 1pm on Friday burnt the whole structure including the belongings of the tenants, who werent around at the time of the incident.

Reports said the grandson of the landlord who is said to be smoking brought in some of his friends to smoke in one of the rooms.

The guys were allegedly smoking and ended up falling asleep, but unfortunately and unknown to them a piece of the weed got in touch with a cloth and caught fire.

However, the fire spread into the other rooms which drew the attention of neighbors around the filling station and they raised an alarm.

A female tenant who confirmed the incident traced the cause of the fire to the young guys.

She narrated that “there are some guys who are friends to the landlord’s grandson (wee smokers) in one of the rooms, they have been smoking always, and they invite ladies outside to smoke here. I saw smoke from one of their rooms where they place dirty clothes, and that’s where the smoke started from”.

According to her “these guys can smoke to the extent that the smoke can even enter my room, then I will be feeling dizzy. When we talk, they attempt beating us. We have complained several times but nothing has been done about it so we stopped”.

The Ghana National Fire Service Station who got the information quickly rushed to the scene but wasn’t able to control the situation.

The fire officers then called for an extra Tender from Koforidua, the Regional Capital who also rushed to the scene to help quench the fire.

The tenants who weren’t at home at that time, heard of the information also rushed to the house but sadly, found their belongings burnt into ashes.

Some of them who spoke to DGN Online are calling on the Police to investigate the matter.

Meanwhile, the situation forced the Electricity Company of Ghana to shut down power supply in the Suhum Township.