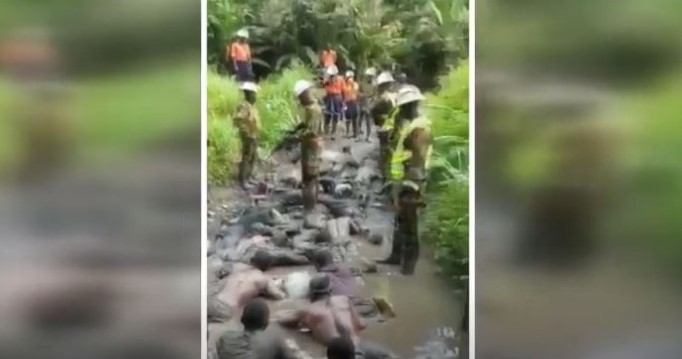 In the released video, the suspected illegal miners were seen lying prostrate in a muddy water body while the military personnel stood over them with guns issuing out instructions.

The suspected miners number about 17, some of whom were shirtless and others whose clothing had been stained with mud.

Addressing the press on the back of the footage on Tuesday, Ranking Member on the Energy Committee in Parliament, John Jinapor condemned the treatment.

He further described the treatment meted out to the miners as “inhumane, despicable, unfortunate and highly reprehensible.”

“We are well informed that following the arrest of these suspected miners on Friday 15th July, the suspects were subjected to severe torture leading to scores of human rights abuses,” he said.

Mr. Jinapor said the Minority finds the development disturbing, adding that “we strongly condemn the use of brute, excessive and disproportionate force in the so-called fight against illegal mining.”

According to him, ‘the fragrant disregard of our laws and Constitution under the Akufo-Addo led government is most unfortunate.”

“Even more disturbing is the fact that the Akufo-Addo/Bawumia-led Government remains mute following this incident. This is a heinous crime meted to the ordinary Ghanaians  ..while turning a blind eye to foreigners.

Foreigners on the other hand, are always treated with kids’ gloves and in some instances the law compromised to favour them in the name of building international relations,” he said.

“You will recall the infamous incident involving a Chinese Galamsey Queen known as Aisha Huang, following her arrest for her involvement in illegal mining, the state unilaterally discontinued the case in court on a flimsy excuse that they stood to secure economic gains for her release,” he added.

As a result, he called on the Interior Minister, Defence Minister and Lands and Natural Resources Minister to constitute an impartial and credible investigation into this act and the culprits made to face the full sanctions of the law.

He said when this is done, it will serve as “the only way to show that the impunity and favoritism that has characterized this Government, is at least, being dealt with.”

Atta Mills’ tomb has been tampered with – Brother fumes