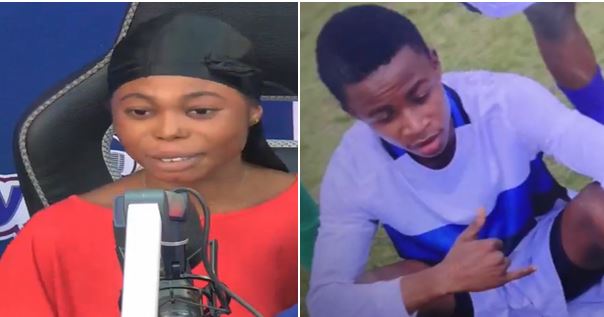 [Video]: I love my baby daddy because he speaks like a woman – 17 year old single mother says

A 17-year-old single mother who is known as Sahadatu has indicated why she lied down for his boyfriend to impregnate her.

Sahadatu who got pregnant at the age of 15 with her boyfriend, Kwaku Owusu 21, stated categorically on Oyerepa Afutuo  Thursday, hosted by ‘MFK’ that, she fell in love with her boyfriend because of how he talks to her.

According to Sahadatu, the boyfriend has a soft voice like a woman and mostly cracks jokes which especially make her feel happy in life.

“Kwaku Owusu is a footballer… I love him because of how he talks to me. He has a soft voice like a woman and mostly cracks jokes to make me feel happy.” She told MFK.

She sadly explained that ever since she got pregnant, Kwaku Owusu has refused to take care of her.

She said, her baby boy is 2 years but Kwaku doesn’t take care of him.

She recounted that, when she got pregnant, her parents abandoned her so she went to Kwaku’s home but his elderly sister sacked her. As a result, she resorted to sleeping outside. She slept in a community school until her friend, Blessing took her home.

Responding to why she brought her case to Oyerepa Radio, Sahadatu stated that, Kwaku should rent a room for her baby as well as pay GHc1000 to settle her bills.