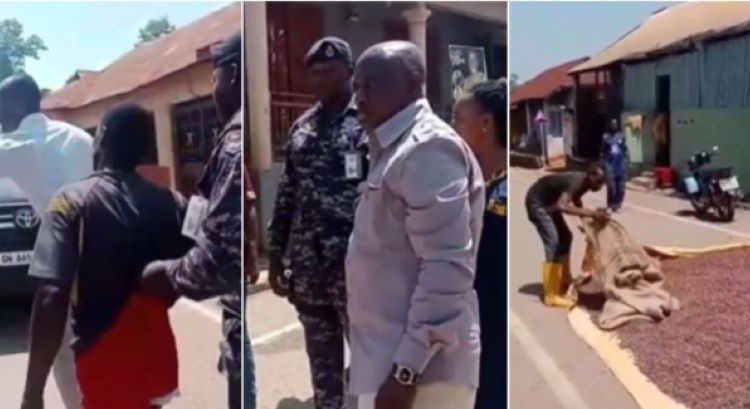 Video: Furious Minister goes off on man for drying cocoa beans on highway

A newly-constructed road at Ntobroso in the Atwima Mponua District of the Ashanti Region was used by some farmers to dry cocoa beans.

In a video on social media, one side of the tarred road was covered with cocoa beans.

“Since when did we start drying cocoa beans in the middle of the road?” the Ashanti Regional Minister questioned.

He was inspecting ongoing feeder road projects in the area with some government officials.

When a cocoa farmer decided to dry cocoa beans on an asphalted road in a town, blocking one lane of the road and the Ashanti Regional Minister, Simon Osei Mensah chanced on it and was irritated by the action of the owner of the cocoa beans. pic.twitter.com/qlIgdxrwVO

After chancing on the development, Simon Osei-Mensah was irked and ordered that they are removed immediately.

One of the residents on the scene complained that they would not remove the beans because the road is not being used for illegal mining to warrant such a directive from the Minister.

Oddly enough, he went ahead to state unequivocally that even if they remove them, they would still dry the cocoa beans again after the Minister and his team had left.

“Is this act not worse than galamsey? We will arrest you if you don’t take care,” Mr Simon Osei-Mensah is heard saying in the video.

But the gentleman swiftly replied to the Minister and said that even if he is arrested, he would be freed, eventually.

It was an interesting exchange as the Regional Minister ordered the security to arrest him for his unfortunate utterances.

Some residents and the assemblyman began pleading on his behalf. They suspected the man in question was drunk.

The man believed to be in his early 40s snubbed the Ashanti Regional Minister and refused to apologise.

“This man standing there, what shows he is drunk? He is just being foolish. What is the sense in this? Arrest him and let’s see if he could come back as he’s saying,” Simon Osei Mensah directed.

50 Cent to produce series on Hushpuppi