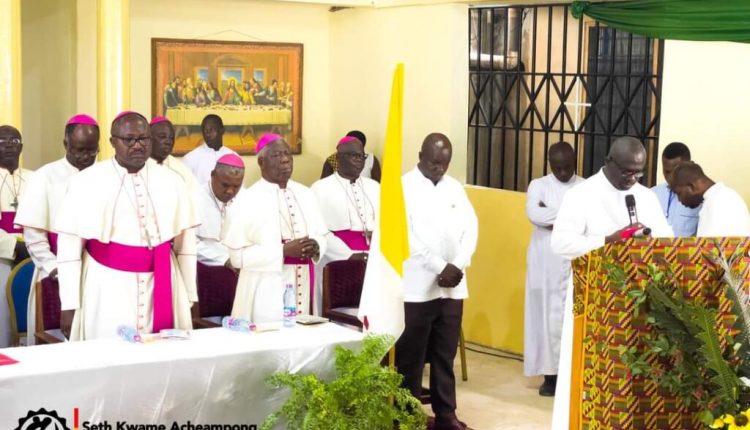 The Ghana Catholic Bishops’ Conference (GCBC) is calling on religious leaders, government agencies, service providers, public and civil servants, individuals and, indeed, all Ghanaians to help in the fight against corruption.

According to the Conference, corruption is not only perceived but very rife in the country.

It is, therefore, calling on all and sundry to stand up and fight the canker.

“We reiterate that corruption in every facet of Ghanaian life is not only perceived but very rife,” a communique issued at the end of the Annual Plenary Assembly of the Conference in Donkorkrom in the Eastern Region observed.

“This is unacceptable and must be dealt with at all times and at all levels of human endeavour.

“Since corruption is cancerous to the life and vitality of our nation, we call on every Ghanaian – religious leaders, individuals, government agencies, service providers, public and civil servants – to stand up and to defend the cause of justice, probity and accountability.”

The Roman Catholic bishops from across the nation urged President Nana Addo Dankwa Akufo-Addo to show “real commitment” in fighting the menace.

They asked him to make use of “the security and intelligence community to investigate allegations of corruption, prosecute as well as recover stolen funds”.

They made a clarion call for the country to “lead and live” the crusade against corruption.

“Let us eschew all attitudes, behaviours and actions that support, encourage and condone bribery and corruption,” they advised, particularly calling on Catholics who are politicians and in public service “to lead this crusade against corruption”.

The Annual Plenary Assembly was held at the Fr. Alfons Merten Centre in Donkorkrom in the Eastern Region on the theme: ‘For a Synodal Church: Communion, Participation and Mission in the Light of the New Evangelisation in Ghana’.

The Assembly witnessed the election of Most Reverend Matthew Kwasi Gyamfi as the new President of the Conference, taking over from Most Rev Philip Naameh, the Metropolitan Archbishop of Tamale.