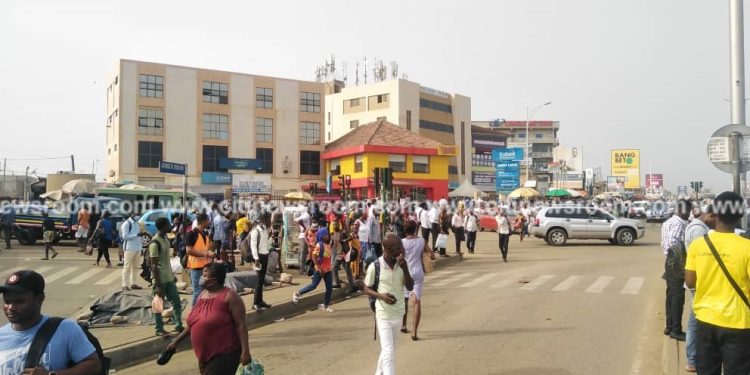 A sit-down strike by commercial drivers across the country has left thousands of Ghanaians stranded at various bus terminals.

The nationwide strike is to protest the high cost of fuel prices in the country.

Citi News’ Reporter, Kwaku Ansah indicated that drivers at Nii Boye Town in the Greater Accra Region had instructed their colleagues to enforce the strike by instructing passengers they had picked up to alight.

“You can see a lot of commuters along the road. Almost everyone is trying to get a vehicle. For the drivers here, they are trying to enforce the strike. When the other drivers with passengers get to the station, they instruct the passengers to alight. The situation at Nii Boye Town is not a very pleasant one. A lot of people are now in a fix.”

At Adenta, Citi News’ reporter Beverlyn Longdon reported that there were long queues at the school junction bus terminal due to the strike.

“When I got to school junction there was a queue and everyone looked stranded and tired,” she reported.

Police from the Achimota Command were deployed to a bus terminal at Lapaz to ensure calm.

Drivers at the Lapaz bus terminal had to also drop off passengers in commercial vehicles in a bid to enforce their sit-down strike.

In the Northern Region, commuters traveling to Tamale or Yendi were stranded at the station due to the strike.

The price of fuel in the country has increased significantly over the past six months, with many complaining about the situation.

Currently, most oil marketing companies in Ghana sell fuel between GH¢6.60 per litre and GH¢6.90 per litre.

Fuel prices in 2021 started at about GH¢5 per litre and are now threatening to cross the GH¢ 7 mark.

There are seven taxes on fuel which amount to GH¢1.9 on each litre of fuel purchased.

2022 Budget: Bagbin gave up on mediation effort for fear of attacks from Kevin Taylor – Afenyo-Markin