Legal Practitioner and Convenor of FixTheCountry Oliver Barker Vormawor has criticized the Chief Justice (CJ) of the Republic of Ghana Justice Kwasi Anin Yeboah for what he calls “legal and administrative incompetence”.

The activist and serial critic of the country’s justice system took to his Social media page Facebook to call out the CJ as the “worst” CJ in living memory.

According to Barker Vormawor, the CJ who is due for retirement later in May this year has “brought the esteem of the Supreme Court even lower” than he “thought was possible”.

“Anin Yeboah has been the worst Chief Justice in living memory. Both in terms of his law and administrative competencies. His tenure brought the esteem of the Supreme Court even lower than I thought was possible.” Barker Vormawor Esq. Wrote. 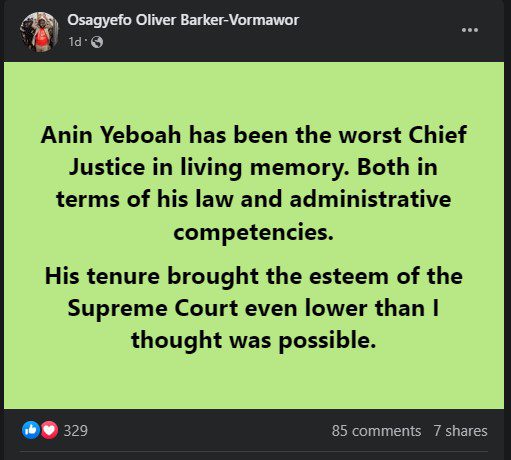 The CJ who is a pioneer of a number of legal reforms since assuming office has been constantly criticized by some activists and elements of the opposition National Democratic Congress NDC who accuse him of doing the government’s bidding.

The CJ and the Supreme Court was recently vindicated when it emerged the opposition went to court without any form of evidence or data, according to National Chairman Johnson Asiedu Nketiah.

CJ Anin Yeboah was appointed in December 2019 by President Nana Addo Dankwa Akufo-Addo to replace Sophia Akuffo as Chief Justice of the Supreme Court of Ghana.

His vetting was opposed by the Executive Director for the Alliance for Social Equity and Public Accountability (ASEPA), Mensah Thompson who wanted Parliament to put on hold, the vetting of Justice Anin Yeboah to allow for CHRAJ to complete investigations on a petition against the nominee.

Mr. Mensah had alleged that Justice Anin Yeboah has not disclosed his assets and liabilities as required by law.

Anin Yeboah whose appointment by President Akufo-Addo was in consultation with the Council of State as stipulated by the Constitution of Ghana was approved as the Chief Justice of the Republic of Ghana by the Parliament of Ghana after vetting in December 2019.

Justice Anin Yeboah was sworn in as the 14th Chief Justice of the Supreme Court of Ghana on 7 January 2020.