On Thursday, DJI tweeted a teaser for a May 10th announcement, saying it’s about to reveal “a twist in the plot.” It seems likely that the company plans on releasing a new drone — especially given that a YouTube video showing a DJI Mini 3 Pro and its controller being unboxed was uploaded on the same day as DJI’s teaser (via DroneDJ).

In their video, YouTuber DM Productions says they got footage of the unboxing from someone who received the unannounced DJI Mini 3 Pro drone early. The video gives us a good look at the drone itself, with its bevy of obstacle avoidance sensors as well as its controller.

As DM Productions points out, the controller is similar to DJI’s current RC Pro, with a few buttons and ports removed. The Mini 3 Pro’s controller also doesn’t have any antennas sticking out from the top, and I’d bet good money on the screen not being as bright or crisp as the one found on the $1,100 RC Pro. 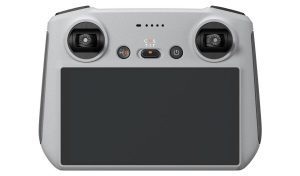 At this point, we’ve gotten a lot of details about this drone. Last month, a leak showed that it would still weigh under 250 grams (meaning that Americans won’t legally have to register it) and that it would add front-facing collision avoidance sensors. That leak also contained information on the drone’s battery (which will apparently be around 2,453mAh) and camera, which we later got even more details about thanks to two retailers listing it for sale early. According to DroneDJ the Mini 3 Pro will cost somewhere around $1,000, and its camera system will be a massive improvement over the Mini 2. (Though you’d hope that’d be the case given that the Mini 2 currently sells for $449.) The 3 Pro is rumored to have a bigger sensor, a lens with a wider aperture that’ll let in more light, and the ability to record at 4K 60fps, instead of the 30fps the Mini 2 tops out at. Oh, and it should be able to do that in HDR, hopefully making it so you don’t have to decide between too-bright skies or too-dark ground.

As for the “twist in the plot” that DJI’s promising, both the retail leaks and the unboxing video mention that you’ll be able to easily switch between shooting portrait video and landscape video with the drone. That’s an interesting feature for those making content for phones — and there is some humor in that DJI’s next drone will be able to shoot vertical content when a drone made by Snapchat doesn’t.

It seems unlikely that there’s much left to leak about this drone, especially in the short amount of time before it’s officially revealed. DJI’s website says the announcement is scheduled for the 10th at 9AM ET.

It is important to note however that the DJI mini 3 Pro needs to run a competitive race against the Autel Evo Nano Plus which already ahead in the game of drones with its spectacular performance in the range of the sub 250g drones. Find below a video of a nigh shot for the Autel Evo Nano plus

2021 Press Freedom Rankings: Acceptance of international assessments without questioning is neocolonial, betrayal of lack of faith in ourselves – Prof. Gyampo