Tesla’s electric cars are currently the most advanced products in the industry, but sometimes they also have some minor problems. Recent reports show that Tesla electric car users around the world were shut out of their cars last Friday due to a server error. Tesla Motors supports the use of a bound iPhone to unlock the door. This can be particularly important in accident situations. However, when this function fails, the door is automatically locked, making it impossible to enter the car. The main method of locking and unlocking Tesla doors is to use a key card (key fob). Nevertheless, the owner can also choose to perform this function through the Tesla app and Bluetooth connection. Last Friday, about 500 Tesla owners were in trouble. The Tesla app on their phone suddenly crashed, making the unlocking function unavailable.

A car owner wrote on Twitter: “I’m experiencing 500 server error to connect my @tesla Model 3 on my iOS app in Seoul, S.Korea. Seems like this is a worldwide issue”.

Elon Musk in his reply said, “Should be coming back online now. Looks like we may have accidentally increased verbosity of network traffic. Apologies, we will take measures to ensure this doesn’t happen again”.

Ford takes a jab at Tesla

It is worth mentioning that Ford has sniffed the opportunity of “falling into trouble” from Tesla’s “error”. Mike Levine, Ford’s North American product communications manager, ridiculed Tesla on Twitter. He wrote on Twitter: “With Ford’s SecuriCode function, you can never be locked out of your car . You know!” 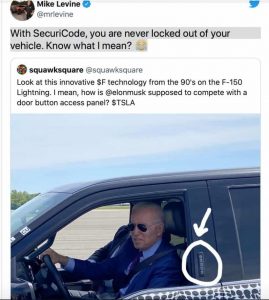 In this tweet, Mike Levine reposted a photo of a previous test drive of the Ford F-150 Lighting by the President of the United States. In the photo, the position of the door frame of the car is also marked with a white arrow, and that is where the Ford SecuriCode is displayed.

Elon Musk is known to be a savage with his response but as of now, he has not responded to Ford’s jab. Probably, he will leave his response for the future when Ford comes under fire.

The issue did not completely resolve until about five hours later. Users of the app kept experiencing intermittent errors of the Tesla app. Mr. Jaehwan Cho, the original poster, wrote on Twitter “Many of you might have curiosity we cannot enter @tesla cars if the server outage happens. But don’t worry, if you carry your phone, you can easily get into the car like me. Server outage on app might cause little discomfort doing remote battery pre-conditioning etc”.