Protesters have said they will continue to occupy the Sri Lankan presidential and prime ministerial residences until both leaders officially resign.

President Gotabaya Rajapaksa said he would step down on 13 July, according to an announcement made by the parliament’s speaker on Saturday.

But the president has not been seen or made a public statement himself.

Thousands descended on Colombo on Saturday demanding his resignation after months of protests.

The president has been blamed for the country’s economic mismanagement, which has caused shortages of food, fuel and medicine for months.

Prime Minister Ranil Wickremesinghe also said he would step down following Saturday’s protests, in which his private residence was set on fire.

But protesters remain sceptical about the leaders’ intentions. 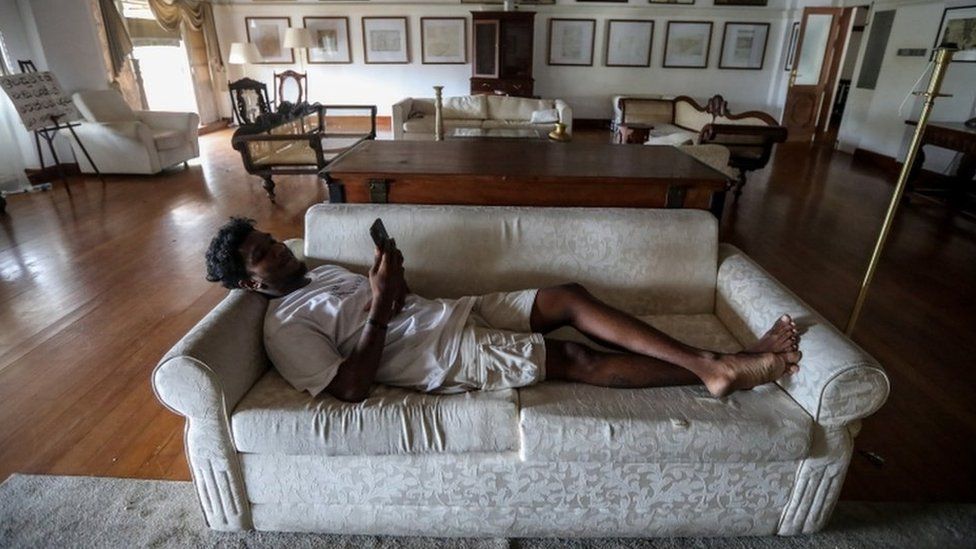 “Our struggle is not over,” student protest leader Lahiru Weerasekara said, quoted by AFP. “We won’t give up this struggle until [President Rajapaksa] actually leaves,” he said.

“The next couple of days are going to be extremely uncertain times as to see what transpires politically,” political analyst and human rights lawyer Bhavani Fonseka told Reuters, adding that it would be interesting to see if the two leaders “actually resign”.

Political leaders are due to hold further meetings to discuss a smooth transition of power on Sunday.

The US Secretary of State, Antony Blinken, said that any new government needed to immediately focus on long-term economic stability.

Dozens of people were injured in Saturday’s protests. A spokesperson for Colombo’s main hospital told AFP news agency on Saturday that three people had been treated for gunshot wounds.

The extraordinary events of Saturday appeared to be the culmination of months of mainly peaceful protests in Sri Lanka.

Huge crowds converged on the official residence of President Rajapaksa, chanting slogans and waving the national flag before breaking through the barricades and entering the property.

The contrast between the luxury of the palace and the months of hardship endured by the country’s 22 million people was not lost on the protesters.

“When the whole country is under such strain people have come here to release that pressure. When you see the luxuries in this house it is obvious that they don’t have time to work for the country,” Chanuka Jayasuriya told Reuters.

Mr Rajapaksa vacated his official residence on Friday as a safety precaution ahead of the planned protests, two defence ministry sources said, according to Reuters.

Although it is Mr Rajapaksa’s official residence, he usually sleeps at a separate house nearby.

The BBC has been unable to confirm the president’s whereabouts.

He had said on Saturday that he was willing to resign to ensure the safety of civilians and to make way for an all-party government, but soon after his announcement videos started circulating of his house up in flames.

The prime minister lives with his family in the private home and uses his official residence for official business only.

Current engagement with IMF does not guarantee support – Dr Assibey-Yeboah