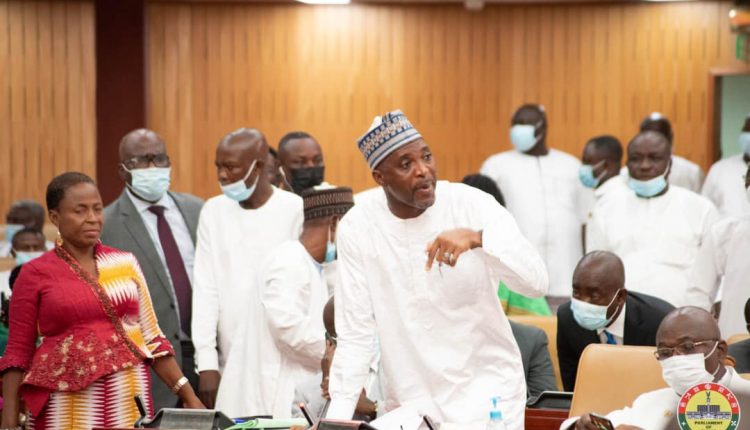 The Minority in Parliament is mounting pressure on its counterparts on the majority side to get President Nana Addo Dankwa Akufo-Addo to report to the House and deliver the 2022 State of the Nation address.

After presenting the business statement for next week on Friday, March 4, 2022, the deputy Majority Leader, Alexander Afenyo-Markin was questioned by members of the Minority about the absence of the State of the Nation address from the planned programmes for the coming week.

The Member of Parliament for Buem constituency, Kofi Adams, who first raised the issue, said he was surprised that no mention was made about the address, although it had been mentioned in past business statements.

But in response, Alexander Afenyo-Markin said, “it is for us as a house to communicate to the presidency our readiness. The president is not out of time. He is within the time required of him to come. So we are putting our house in order. We will programme for the president to come.”

The Business Committee of Parliament had earlier scheduled February 24, 2022, for the address but postponed it to March 3, 2022.

It has since postponed the address indefinitely.

Article 67 of the Constitution, states that the president must present to Parliament the address on the State of the Nation at the beginning of each session of Parliament and before the dissolution of Parliament.

With next week being the 7th week, the Minority said the president’s address was already late in coming.

The Member of Parliament for Juaboso, Kwabena Mintah Akandoh, asked whether the delay in presenting the address was because the president had “no good news” for Ghanaians.

“We don’t even know when he is coming to address the House. Except that he has no good news to tell the nation because if he has good news to tell Ghanaians he would have been in a hurry to deliver the address.”

The Minority Chief Whip, Muntaka Mubarak also took issue with the development, and said, this will be the first time in the 4th republic that the address will be delivered beyond the month of February.

“This is the first time in the history of the fourth republic that the State of the Nation Address has run into March. It has never happened before. It was supposed to be 24th February, then it was changed to 3rd March and now indefinitely. Don’t put the blame on our doorsteps. It is your job [as Majority] to remind the president that the first sitting of this session is almost ended and therefore Parliament is expecting him to come and deliver the address,” he said.

E-levy will be used to raise loans – Amoako-Atta