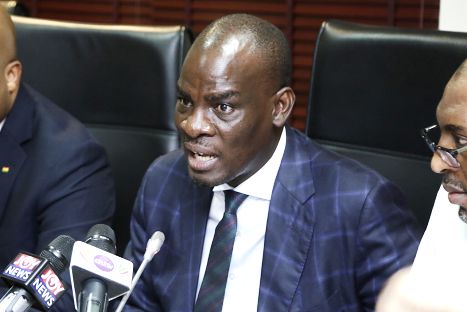 The Minority in Parliament has accused the Majority Caucus of deliberately ignoring the facts surrounding the attempted arrest of the Member of Parliament for Madina, Francis-Xavier Sosu, and the Speaker’s handling of same.

The Majority had suggested that the Speaker of Parliament, Alban Bagbin, seemed to be instituting new rules that seem to undermine the rule of law without any prior discussions with the leadership of the house.

In a statement on Thursday, the Majority Caucus said the refusal of the Speaker to release the legislator to assist with investigations into alleged offenses is of extreme concern.

It said the Speaker’s handling of the case, which is troubling, was a shift away from what his predecessors had done in similar cases in the past.

But the Minority, in a statement on Thursday, disagreed with the Majority’s claims, insisting that the Speaker was only trying to ensure that the Police follows standard procedures in inviting the MP for questioning.

“The police attempted to arrest him on Sunday 31st October 2021 while he was worshiping in church. This was in spite of the fact that the police wrote to the Speaker on 27th October, 2021 and the Speaker replied and reiterated the fact that there is a procedure that is to be followed with respect to inviting a Member of Parliament to assist in investigations and until that procedure is followed , he as Speaker would not entertain their request. Criminal summons was subsequently issued against the MP with charges to appear before the court on 8th November 2021

“The Majority Leadership is being mischievous and disingenuous by ignoring the fact that the Police refused to comply with the established protocols of dealing with matters affecting MPs by not, first of all, contacting the Speaker who would have then made the necessary arrangements for them to meet with the affected MP.

The Minority, in their statement signed by their leader, Haruna Iddrisu, said the Majority’s statement shows an attempt to undermine the authority of the Speaker.

The Police have secured criminal summons against the MP in court after they tried on two occasions to arrest him.

But Francis-Xavier after failing to honor police summons accused the security agency of being disingenuous with their account of events.

The Parliamentary Service has also said it takes strong exceptions to the manner the Ghana Police Service is seeking to apprehend the legislator over alleged wrongdoing.

In a response to the police, the parliamentary service intimated that, although the immunity of MPs is not absolute, the legislator cannot be hounded in a way that is unconstitutional and threatens the country’s democracy.

It also finds it incomprehensible why the police administration has failed to secure a certificate from the Speaker of the House before going ahead to effect the arrest of the MP.

Speaker’s refusal to release Sosu to police is troubling; a departure from precedent – Majority Caucus