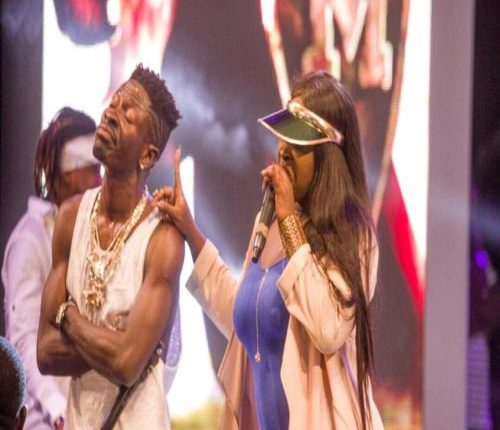 Mr. Emmanuel Arhin, manager of award – winning afrobeats artist, Sista Afia has given reasons why his artist distanced herself from Shatta Wale.

Speaking to SammyFlex on Zylofon Radio’s entertainment morning show, he said people had started tagging his artist as a Militant (Shatta Movement Records signee) and because of that she (Sista Afia) decided to distance herself from Shatta Wale for a while and do stuff without shatta Wale’s involvement and see how things will pan out.

Mr. Arhin also disclosed that his artist has so many songs with Shatta Wale but decided not to release them just to prove to people that she’s not a Shatta Movement signee.

This in a way affected the relationship they had because Sista Afia is hardly seen hanging out with Shatta Wale. The artist manager refuted that perception and insisted that his artist and Shatta Wale are ‘cool’ and that they met a few month months ago and had a chat.

SammyFlex, the host of the show, said he didn’t get the impression that Sista Afia was ‘cool’ with Shatta Wale when he interviewed her some few months ago. Because in the said interview, she even refused to mention Shatta Wale’s name.

However things have changed and we hardly see Sista Afia hanging out with Shatta Wale as it used to be.

When, asked on Zylofon FM why she’s no longer seen hanging out with Shatta Wale like it used to be.

“When I entered the industry, Shatta Wale gave me a lot of platforms; and I was all over him. He supported me but I wanted to be on my own. So I had to distance myself from him so people don’t see me as one of his militant. I am still very cool with him”.