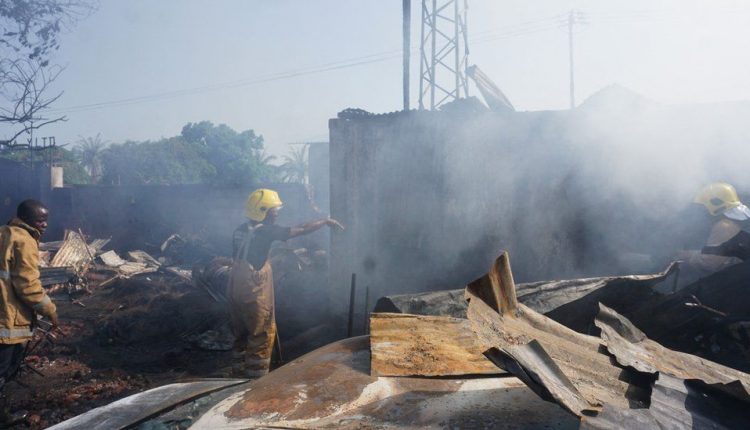 At least 98 people have died after a massive explosion when a fuel tanker collided with a lorry in Sierra Leone’s capital, Freetown.

Fuel spilled before igniting and the resulting inferno engulfed bystanders and vehicles at a busy junction.

After visiting the scene, Vice-President Mohamed Juldeh Jalloh said it was a “national disaster”.

He said that the injured would receive free medical treatment.

Some 92 people are being treated in hospitals and health centres around Freetown, some of which are said to be overwhelmed.

The explosion is believed to have happened at a junction outside the busy Choithram Supermarket in the densely populated Wellington suburb in the east of the city at around 22:00 GMT on Friday.

Sierra Leone’s National Disaster Management Agency (NDMA) said the vehicles collided when the tanker was entering a nearby filling station to discharge its fuel.

The drivers, noticing a leak, exited their vehicles and warned people to stay away. The explosion occurred when people tried to collect the fuel, the NDMA said. 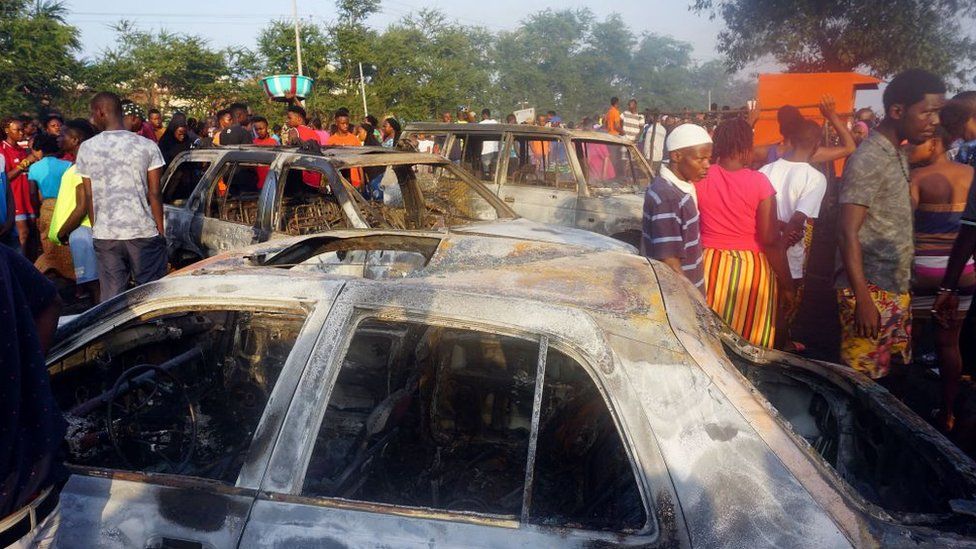 [AFP]   Many of those killed were trapped in their vehicles

One report said a bus was completely burnt, while nearby shops and market stalls were caught up in the flames.

“It’s a terrible, terrible accident,” he told local media in a video shared from the scene.

At the scene of the accident, there are body parts still lying in burnt-out vehicles. Also here are what’s left of the petrol tanker and the truck that rammed into it.

Motorbike-taxi riders nearby started collecting the leaking fuel, causing a traffic jam. Shortly after, there was an explosion.

The fireballs spread into the surrounding area and onto the vehicles caught in the traffic.

The authorities say most of the dead have now been received at the central morgue in Freetown, with the critically injured admitted to hospitals across the city. The army, police and fire force are all at the scene.

The port city of Freetown, which is home to just over a million people, has faced several serious disasters in recent years.

In March, more than 80 people were injured after a major fire in one of the city’s slums left more than 5,000 people displaced.

And in 2017 over 1,000 people were killed after heavy rains led to a mudslide that swept through the city, leaving around 3,000 people homeless.