The death of a couple and their only male child within the span of three days has thrown the Ejura township in the Ashanti region into a state of shock.

Some relatives are suggesting the death of Salo Salamatu and her husband, Illiasu Akurugu could be linked to the ill health and subsequent death of their only son, Mohammed Eliasu Awedam, also known as Doe.

The 78-year-old mother died on December 30, 2022, upon learning of her son’s poor health. On January 2, the 38-year-old Doe gave up the ghost, and on the same day his father, aged 83, died upon learning of the passing of his son.

The parents had left their Ejura abode for their native Burkina Faso when news of their ailing son reached them.

Madam Salo, said to be without a history of high blood pressure, started experiencing one till her health deteriorated.

Haruna Mumuni, also known as Plus 2, nephew of the deceased Mohammed, told myjoyonline.com his uncle died on Monday, January 2, 2023, at his Ejura residence.

As the family prepared to break the news of the death of his son, a call came through to the family announcing the passing of Mr Akurugu.

The son, Mohammed, had abandoned his carpentry craftsmanship and ventured into farming. But he took ill and sought treatment at the Ejura Government Hospital and the St. Luke Hospital at Kasei but never recovered.

The family insists his sudden poor health and subsequent death cost the lives of his parents.

Mohammed left behind a wife and four kids.

Meanwhile, some friends of Illiasu who is yet to be buried have taken to social media platforms to express shock over his death and that of his parents. 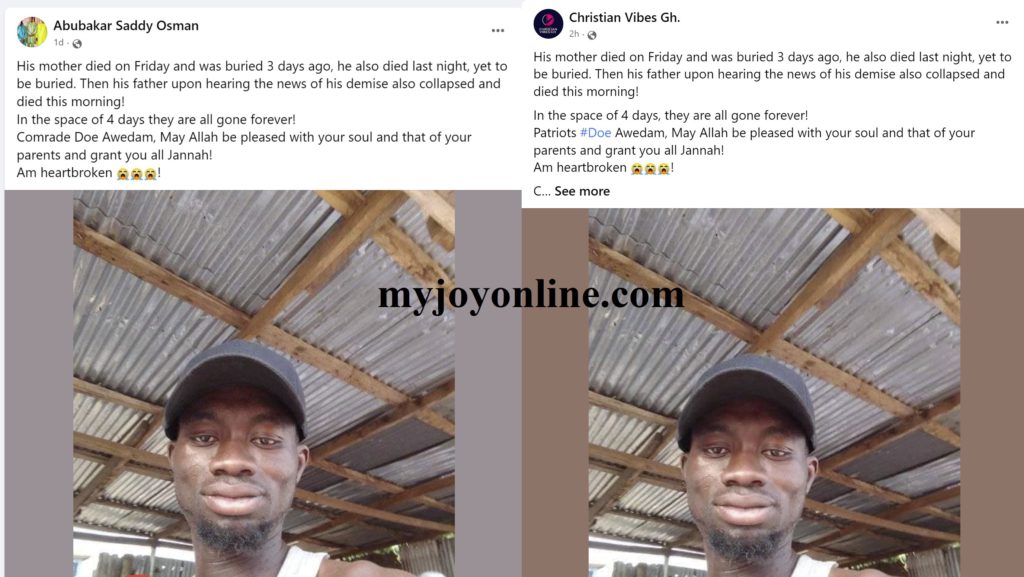 Alleged Airbus bribery : OSP says it is engaging INTERPOL and central authorities of UK and US