Shatta Wale has been arrested

Yesterday, news went viral that Shatta Wale was battling for his life at an unknown hospital after being shot by unknown gunmen.

But in a swift effort to ascertain the news, the police launched investigations into the matter.

A team was deployed to his house but he was not found and his close friends and family members were contacted but “all of them claim not to have knowledge of his whereabouts or the alleged incident,” the Ghana Police Service said in a press release on the night of Monday, October 18.

According to the police, searches were ongoing to locate the hospital in which the controversial is said to be receiving treatment.

Below is yesterday’s statement from the Police Service. 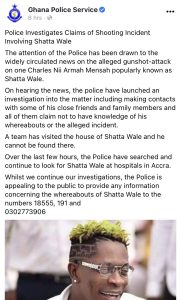 In a dramatic turn of events, the Police has released a statement moments ago stating that the “One Don” hitmaker has been arrested.

After we publicly declared him and one other person wanted, the suspect, Shatta Wale, turned himself in today Tuesday 19th October, 2021, at 8.59pm.”, a post on the service’s Facebook page states.

The arrest of the Dancehall King, according to the statement is “to assist the Police in investigations for his alleged involvement in the creation and circulation of information intended to cause fear and panic.” 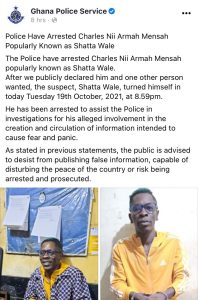 Earlier today, the Police announced in a statement that they have arrested two persons for “Spreading False Information in Connection with Alleged Gunshot Attack on Shatta Wale”.

It says one Kojo Owusu Koranteng, also known as Nana Dope and another named Eric Venator, alias Gangee, have been arrested for “allegedly spreading false information with the intention to cause fear and panic”. 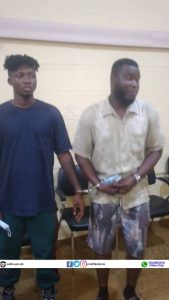 According to the statement, “the arrest of the suspects is in response to the alleged circulation of false claims on the alleged gunshot attack on Shatta Wale”.

“Shatta Wale and one other person popularly referred to as ‘Deportee’ are currently being pursued for their possible involvement and knowledge of the circulation of false information with the intention to cause fear and panic”, the statement further states.

The Service has served notice that “no one will be spared if Police investigations point to their possible criminal culpability in this matter”.

“We want to caution any individual or group to desist from making false claims and engaging in acts, capable of disturbing the peace of the country because the law will come after you.”