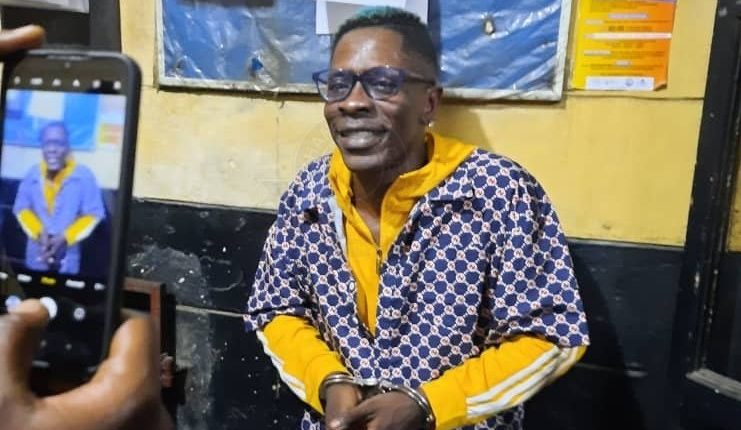 Dancehall artiste, Shatta Wale and three other accomplices have been remanded into police custody for a week.

They were remanded by an Accra Circuit Court on Thursday, October 21, 2021, on their first appearance in court.

A fourth accomplice who is also a member of Wale’s crew was arrested on Wednesday, October 20, 2021.

Shatta Wale pleaded not guilty to the charge of publication of false news and causing fear and panic.

His accomplices, Kojo Owusu Koranteng, Idris Yusif and Eric Venator have been charged for abetment of crime are also to spend the next one week in police custody.

They also pleaded not guilty to the charge.

The four persons are expected to reappear in court on October 26, 2021.

The musician and his crew members have already spent two nights in police custody.

Shatta Wale was arrested on Tuesday after the police announced that they were looking for him over his involvement in the spread of false information that he had been shot at East Legon. in Accra.

Prior to his arrest on Tuesday, he apologized to his fans and people who had been affected by the prank in a Facebook post.

He made reference to a prophecy that was made by Bishop Stephen Kwesi Appiah of New Life Kingdom Chapel that he would be shot dead on October 18, 2021.

Bishop Stephen Kwesi Appiah also known as ‘Jesus Ahoufe’ of New Life Kingdom Chapel who has also been arrested over his prophesy and charged with causing fear and panic is expected to also appear before court today [October 21, 2021].

If Your Guy Has These 10 Qualities, Don’t Ever Lose Him