The Member of Parliament for Ningo-Prampram, Sam Nartey George, wants sittings of the ad-hoc committee constituted to probe allegations made by the Minority against the Finance Minister, Ken Ofori-Atta, to be televised.

He made the call after the Speaker of Parliament, Alban Bagbin constituted an 8-member committee co-chaired by KT Hammond, Adansi-Asokwa MP, and Dominic Ayine, Bolgatanga East MP, on Thursday, November 10, 2022, to probe the allegations.

“I want to make a plea that the sittings of the committee be telecast live given the nature of the matter and be made public just like the Sputnik V committee in the spirit of transparency and accountability,” he said.

The committee which has 7 days to submit its report comprises Samuel Okudzeto Ablakwa, Zanetor Agyeman-Rawlings, Bernard Ahiafor on the Minority side and Patrick Yaw Boamah, Kwame Anyimadu-Antwi and Andrew Agyapa Mercer from the Majority side.

The Minority side in Parliament filed a motion seeking a vote of censure to be passed on Ken Ofori-Atta over the current economic crisis.

The NDC legislators made seven allegations against the Finance Minister.

The claims are conflict of interest, unconstitutional withdrawals from the Consolidated Fund, illegal payment of oil revenues into offshore accounts, deliberate and dishonest misreporting of economic data to Parliament, fiscal recklessness, alarming incompetence and gross mismanagement of the Ghanaian economy.

According to Haruna Iddrisu, the record inflation rate, the depreciation of the cedi, the excessive borrowing and the reckless spending and the failure to control fuel prices are clear indications that the Finance Minister is not fit to continue in his role. 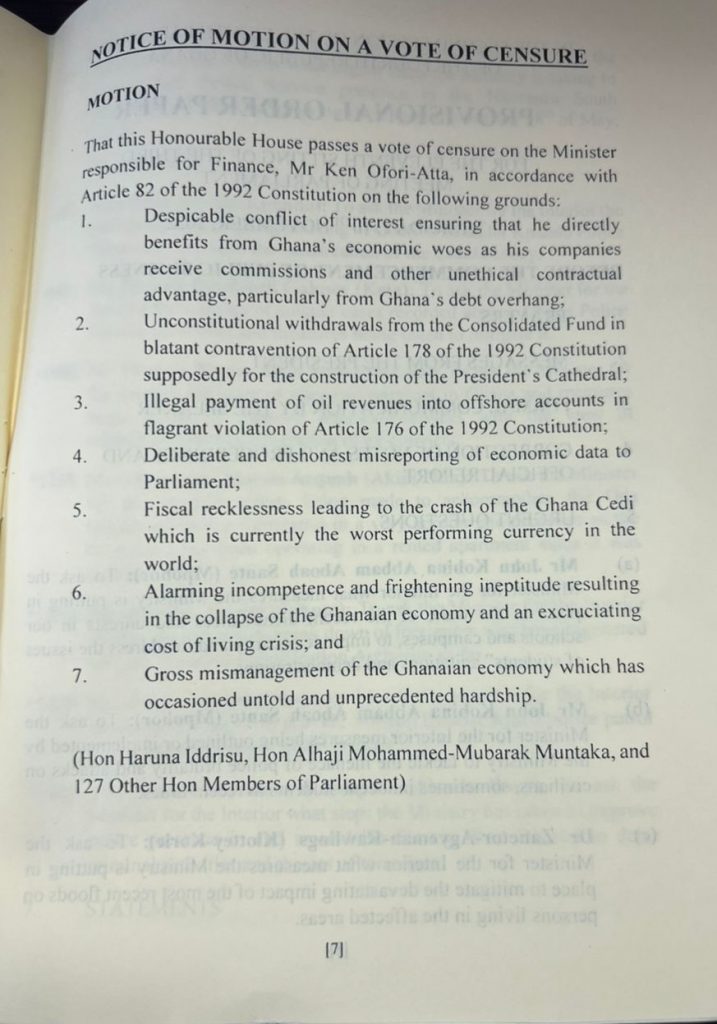 The Tamale South MP in Parliament on Thursday added that “Ghana’s economy is currently in a ditch” and called on the Majority side of the House to join the motion to remove the Finance Minister to regain the confidence of investors and save the economy from total collapse.

According to him, issues raised by the Minority Leader border on criminality. He said Parliament cannot arrogate to itself judicial powers to try the Finance Minister, and called on the Speaker to allow Mr Ofori-Atta to defend himself before any decision is made.

Bagbin must be tolerant of divergent views – Inusah Fuseini