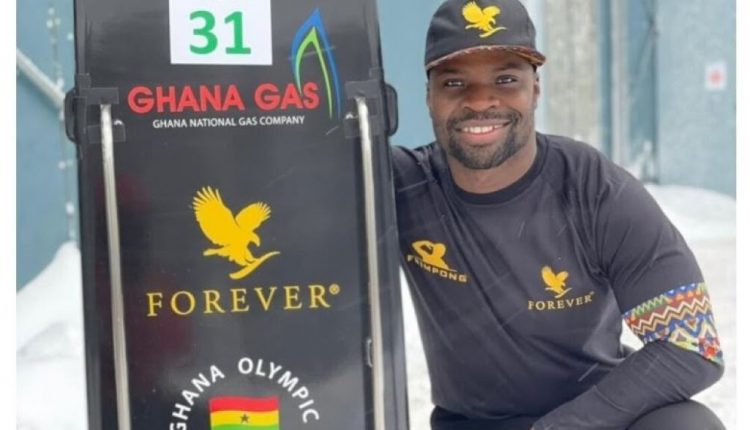 Deep in winter, hurtling a few inches above the snow at 75+ miles an hour, round a spiral icy track is Akwasi Frimpong who has been adorning the Ghanaian identity in the face of a tough knot. The speed, the navigation, and the freezing ice of the Skeleton sport for the most part give an impression of a fast, scary, and dangerous sport. Yet he would not give up, even if there’s no snow in his native Ghana. Despite the game being uncommon to an average African unlike football, Frimpong has found a tenacious delight in the game and he’s fast becoming monumental.

He has been working hard on breaking the limits of the icy track, to put Africa on focus through the game. “I’m just gonna go all out and fight for my continent, fight for my country, to be able to get a spot for Africa,” he said in a video interview with CGTN Africa that theafricandream.net watched early in November 2021.

His story is a resounding inspiration from growing up in a single room in Kumasi, Ghana, to living as an illegal immigrant in the Netherlands, to finally becoming an international athlete. He made history in 2018 by becoming the first skeleton athlete from Ghana competing in the Olympics held in Pyeongchang, South Korea. He didn’t stop there, two years down the track in 2020, he became the first African to bag a victory in an elite skeleton race regulated by the USA Bobsleigh & Skeleton Federation in Park City, Utah. This was a major stardom shoot for the tenacious athlete.

Currently, in his push for glory, he has bagged eight gold, four silver, and four bronze medals, in both other local and international events. He looks to mark more territory for himself in the forthcoming 2022 Beijing Winter Olympics and scoring medals for Africa in skeleton sport soon too.

In his CGTN Africa interview, he described his weight lifting training. “For the push…you have to push the sleigh which weighs about 35 kilos” down a 50 meters run for the start before diving on it in speed navigation of about a mile long around the spiral, slippery icy track. He mentioned that there’s 17 of these different ice course in the world, with different shapes, corners “and you have to memorize all these different corners”. Explaining further how uneasy it is mastering the navigation around these unique tracks because they require “a lot of patience, a lot of focus.”

The facility to train for the sport is however not available in Africa. “I don’t understand it, it looks like a complex sport,” a Ghanaian local said to a CGTN correspondent. It may be uncommon in this part of the world, but the joy of having a son of the soil competing in the game is enough pride for many Ghanaians.

For Frimpong, he believes this shouldn’t hold Africans back from the sport. He said there’s a need to train more Africans in the skeleton sport and inspire many others, especially Ghanaians. He sees himself as representing Ghana and all of Africa against many other countries, saying “it’s not an easy feat.”

He emphasized that he would not give up because he has one major history to break, which is to become Africa’s first Winter Olympics medalist. An achievement he’s training hard to attain. All at theafricandream.net are so proud of him, and we invite you to check out his CGTN Africa video in this link: https://youtu.be/TRMn-mdRQuU

Read also: Enough of the propaganda lectures, provide answers to the questions you posed in similar lectures in the past – NDC Activist to Bawumia