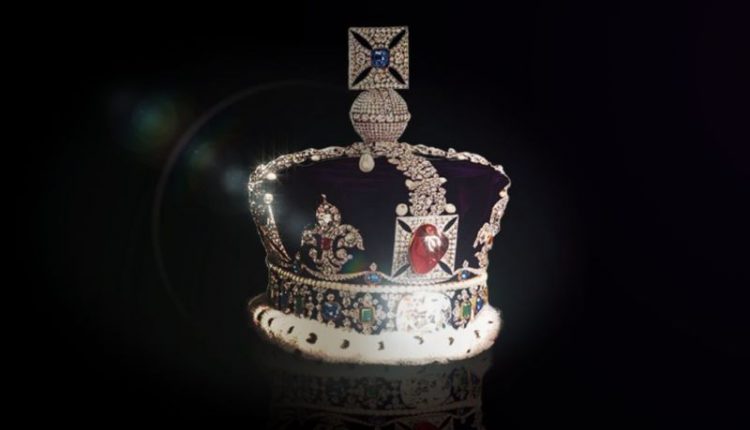 Queen Elizabeth II: Plans for her lying in state and funeral

The Queen has died, ending the longest reign in British history.

She died peacefully, surrounded by her family at Balmoral Castle in Scotland.

In the days ahead, here’s what we expect for her lying in state and her state funeral, as the nation pays its respects.

The Queen’s lying in state

After her coffin returns to London, the Queen will then lie in state in Westminster Hall for about four days before her funeral, allowing members of the public to file past.

The grand hall is the oldest part of the Palace of Westminster, at the heart of British government.

The last member of the Royal Family to lie in state in the hall was the Queen Mother in 2002, when more than 200,000 people queued to view her coffin.

The Queen’s coffin will rest on a raised platform, known as a catafalque, beneath the 11th Century hall’s medieval timber roof. Each corner of the platform will be guarded by soldiers from units that serve the Royal Household.

She will be brought to Westminster Hall from Buckingham Palace in a slow procession, accompanied by a military parade and members of the Royal Family. 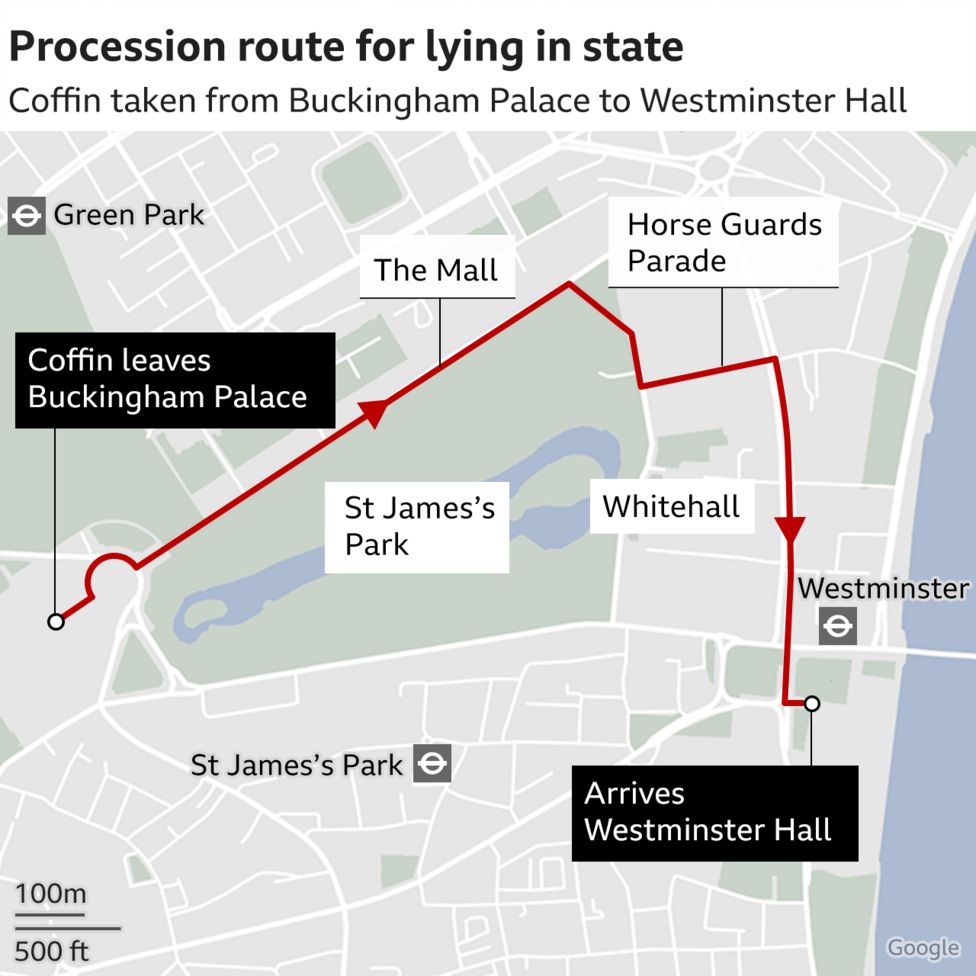 People will also be able to watch the procession as it passes through the streets and big screens broadcasting events are likely to be set up in London’s Royal Parks.

Her coffin will be draped in the Royal Standard and once in Westminster Hall it will be topped with the Imperial State Crown, orb and sceptre. 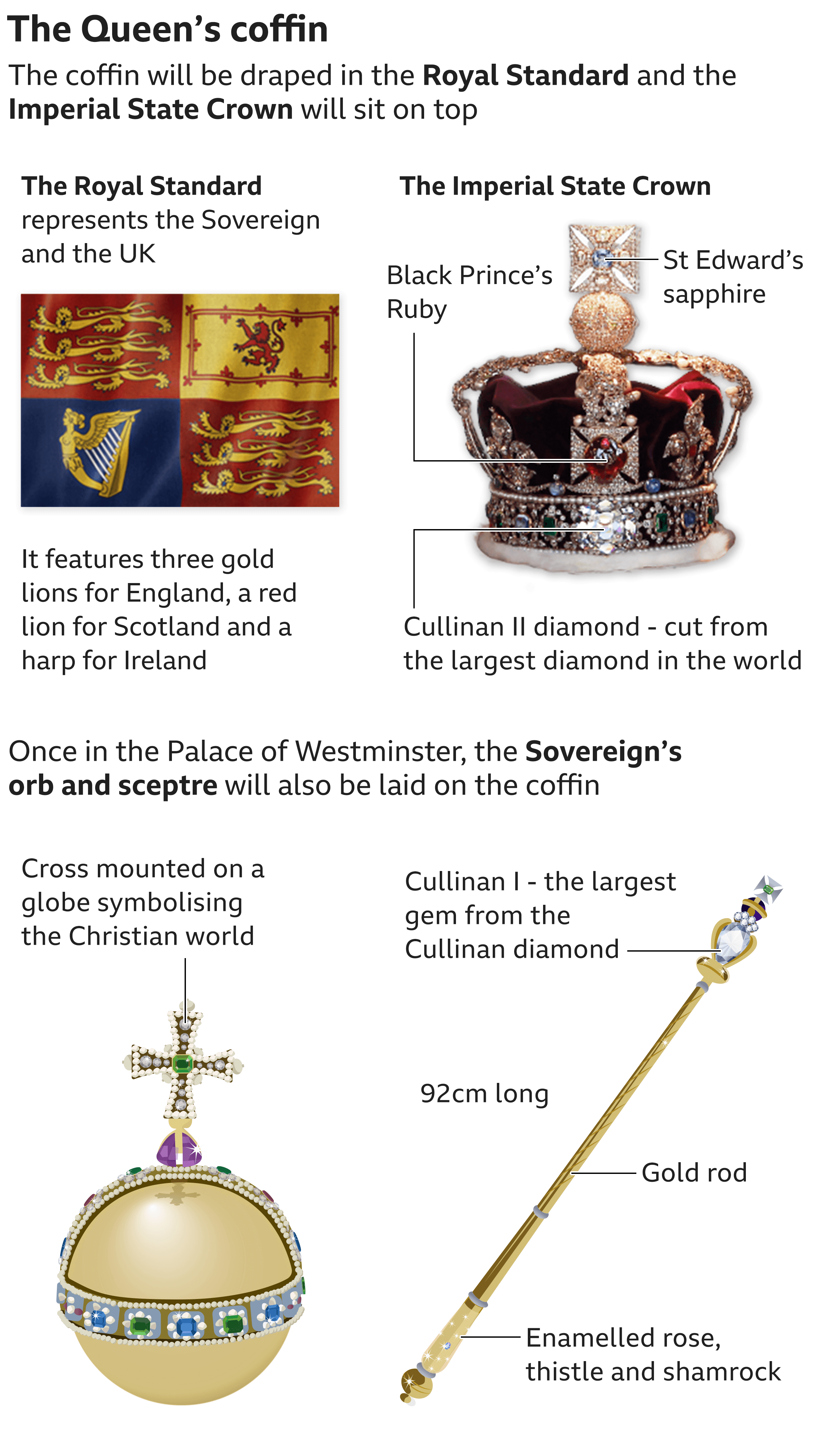 Once the coffin is placed in position in the hall, a short service will be held. Afterwards the public will be allowed to enter.

When is the Queen’s funeral?

The Queen’s state funeral is expected to take place at Westminster Abbey in less than two weeks, the exact day will be confirmed by Buckingham Palace.

The abbey is the historic church where Britain’s kings and queens are crowned, including the Queen’s coronation in 1953, and where she had married Prince Philip in 1947.

There hasn’t been a monarch’s funeral service in the Abbey since the 18th Century, although the funeral of the Queen’s mother was held there in 2002.

Heads of state from across the world will be flying in to join members of the Royal Family to remember the life and service of the Queen. Senior UK politicians and former prime ministers will also be there.

The day will begin as the Queen’s coffin is carried from Westminster Hall to Westminster Abbey on the State Gun Carriage of the Royal Navy. 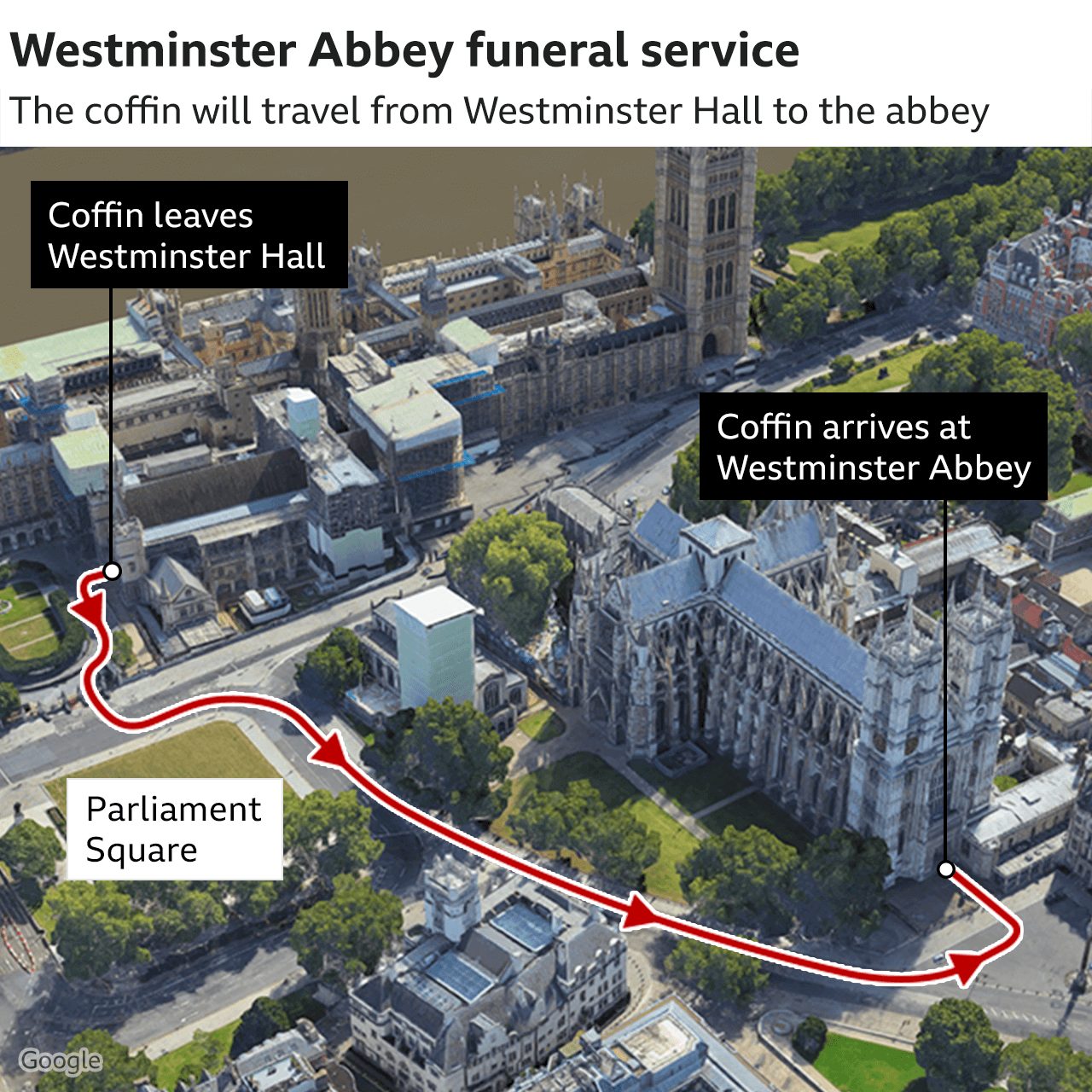 The gun carriage was last seen in 1979 for the funeral of Prince Philip’s uncle, Lord Mountbatten, drawn by 142 sailors from the Royal Navy.

Senior members of the Royal Family, including the new King, are likely to follow in procession.

The service will likely be conducted by the Dean of Westminster David Hoyle, with the Archbishop of Canterbury Justin Welby giving the sermon. Prime Minister Liz Truss may be called on to read a lesson. 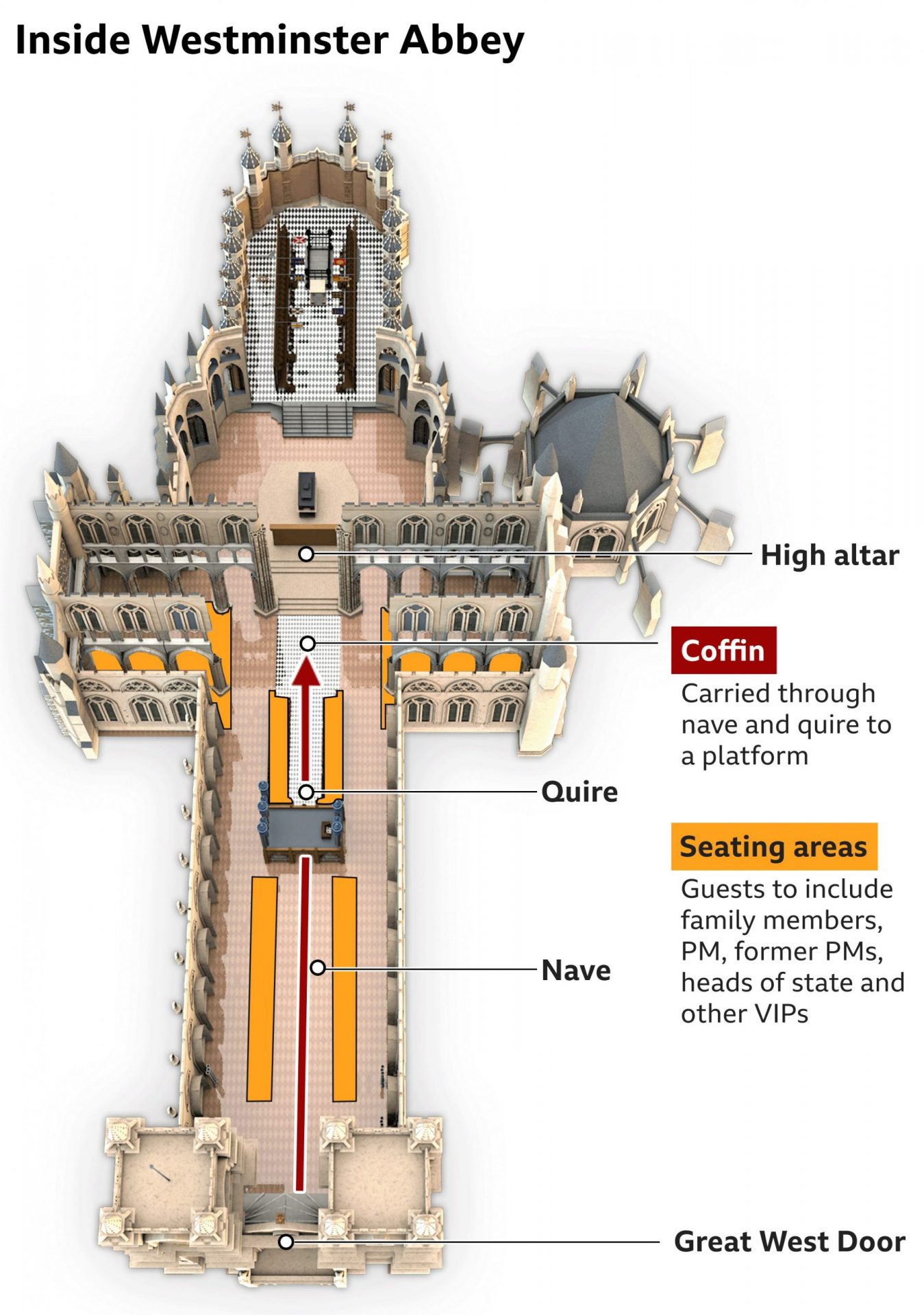 Following the funeral service, the Queen’s coffin will be drawn in a walking procession from the abbey to Wellington Arch, at London’s Hyde Park Corner before heading to Windsor by hearse.

The Queen’s coffin will make its final journey that afternoon to St George’s Chapel in Windsor Castle.

The King and senior members of the Royal Family are expected to join the procession in the Quadrangle in Windsor Castle before the coffin enters St George’s Chapel for a committal service. 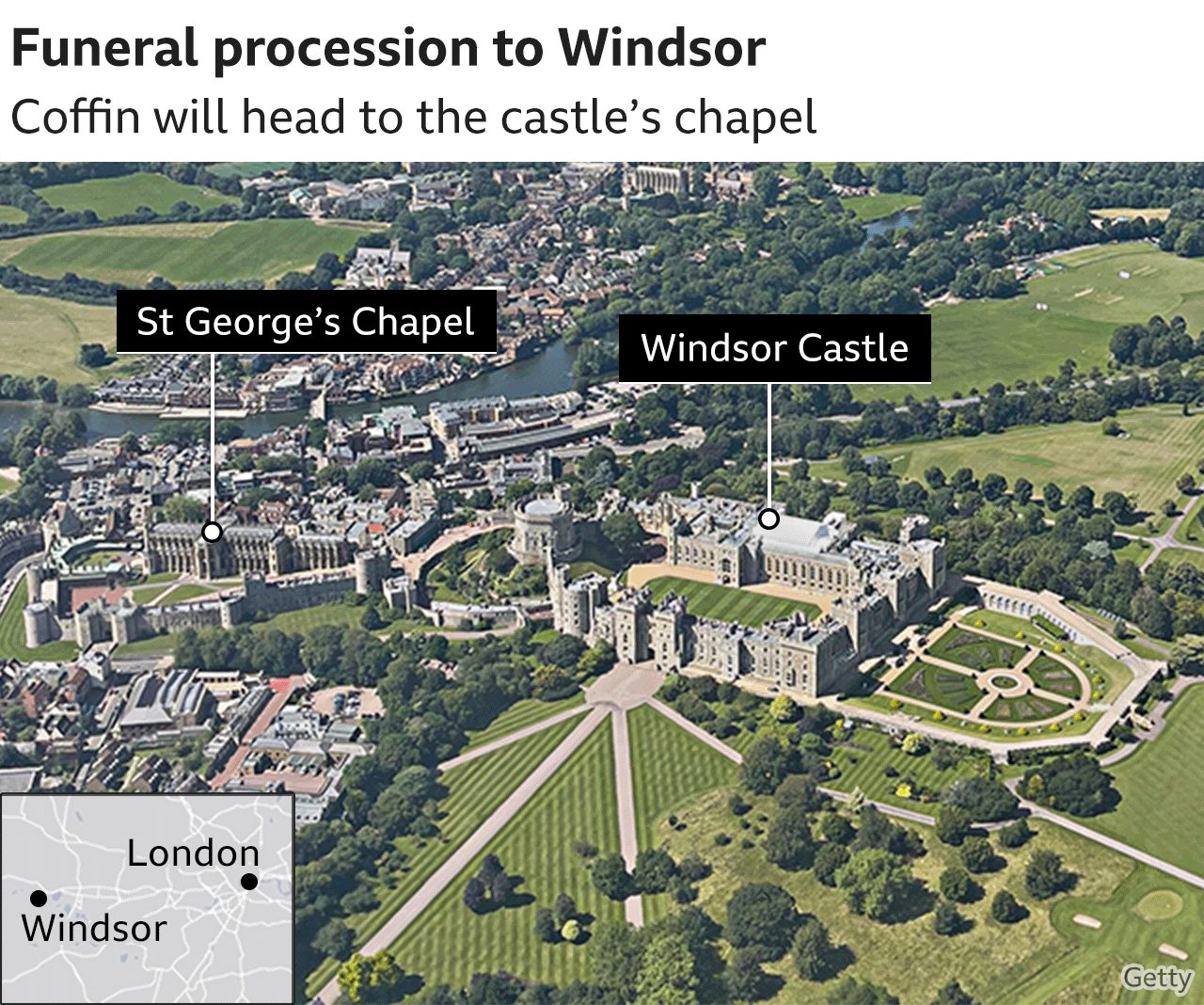 St George’s Chapel is the church regularly chosen by the Royal Family for weddings, christenings and funerals. It is where the Duke and Duchess of Sussex, Prince Harry and Meghan, got married and where the Queen’s late husband Prince Philip’s funeral was held. 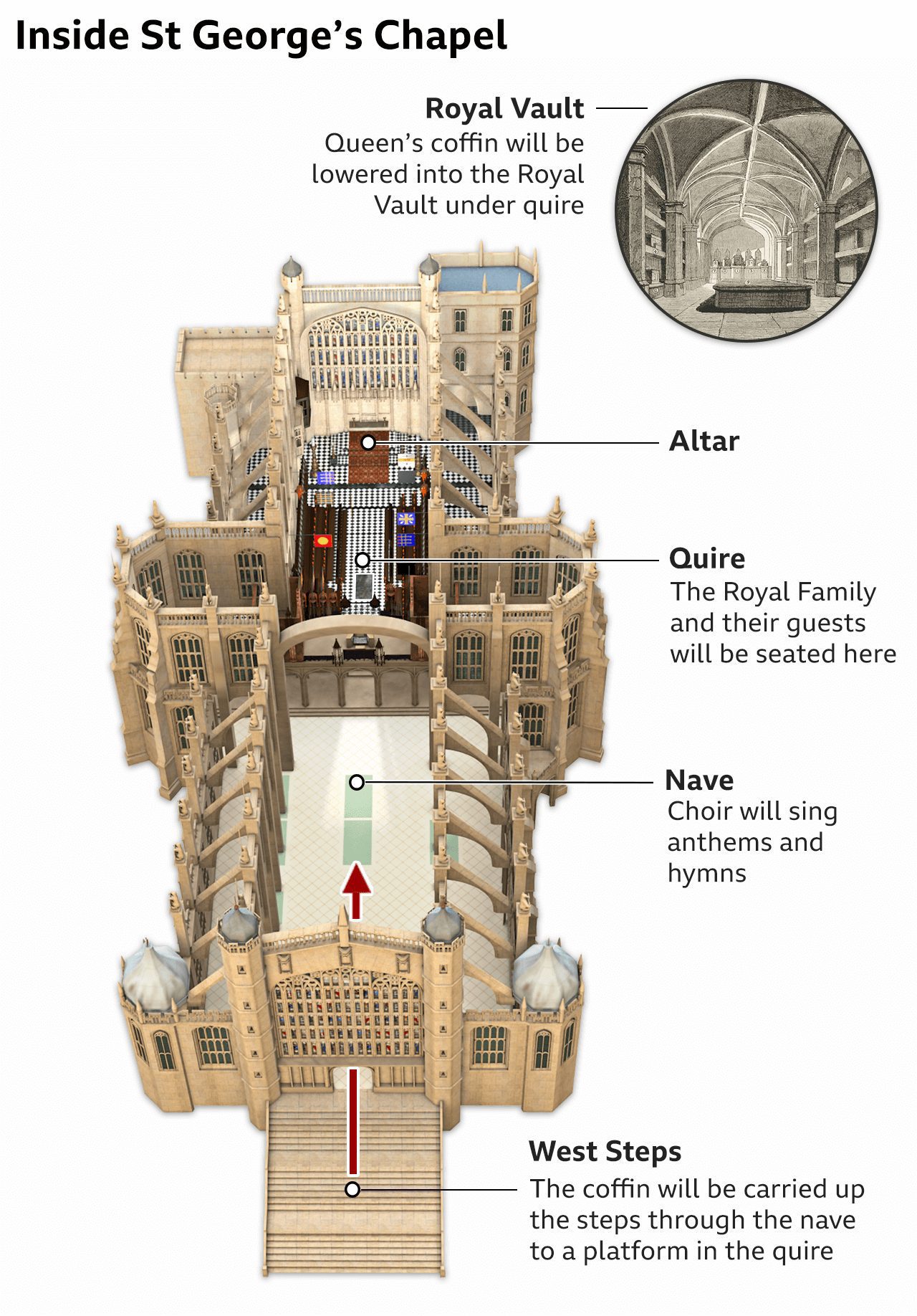 The Queen’s coffin will be lowered into the Royal Vault before being interred in the King George VI memorial chapel, located inside St George’s Chapel.

Queen Elizabeth’s death: Akufo-Addo directs that all official flags should fly at half-mast for 7 days