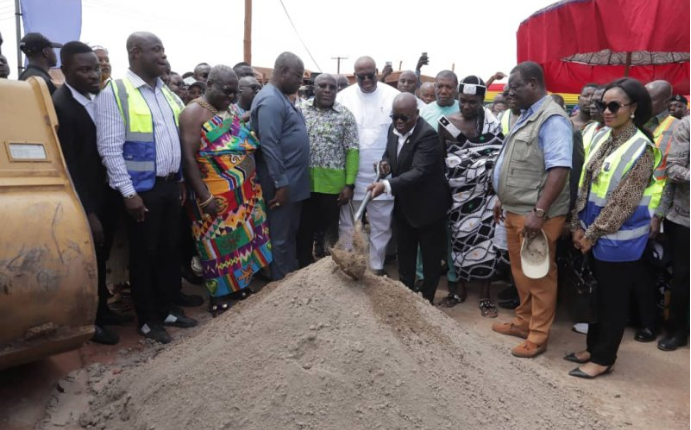 President cuts the sod for rehabilitation of Dome-Kitase road

President Nana Addo Dankwa Akufo-Addo on Friday cut the sod for the construction of the 23-kilometre road that links Dome in the Greater Accra Region to the Kitase Road in the Eastern Region.

The 35 million dollar road project which is expected to be completed in 12 months would serve as an alternate route connecting Accra to Kumasi road, and the Accra-Aburi-Koforidua road.

The road would also provide access to the Ashesi University at Berekuso. The project is being funded by the Government with the support of the Kuwaiti Government. Messrs First Sky Construction Ltd, an indigenous company is undertaking the project.

Speaking at the sod-cutting ceremony, President Akufo-Addo noted that the construction of that stretch of road had been the subject of promises made by various political parties and successive Governments over the years.

“I am happy that it is under the Presidency of Nana Addo Dankwa Akufo-Addo that the rehabilitation of the Dome to Kitase Road is finally being undertaken,” he said.

The President told the gathering that the project was in line with the Government’s agenda to provide the good, quality road infrastructure to accelerate the socio-economic development of the country.

He highlighted some of the major road sector projects undertaken by his administration to facilitate transportation in the country.

These include the construction of 100 kilometres of roads and auxiliary infrastructure under the Kumasi Inner Ring Road and adjacent streets project. Under this project, roads in Nyhiaeso, Bantama, Oforikrom, Manhyia, Subin, Tafo Pankrono, Asokwa, Suame and Kwadaso have been constructed.

The President also mentioned the ongoing works on the second 100-kilometre Kumasi Inner City Roads Project, which is being undertaken by M/S Sino Hydro and is currently 10 per cent complete.

He said the Government was working on the dualization of Tema- Aflao Road, including the construction of interchanges at Kpone, Savana, Dawhenya and Prampram, as well as the widening of the Beach Road, from Independence Square to Tema, in the Greater Accra Region.

Work is also ongoing to upgrade the 15.4-kilometre Ofankor to Nsawam Road into a ten-lane facility, including the erection of interchanges at Amasaman, Pobiman, Medie and Nsawam has just commenced.

“Asphaltic overlay works throughout the country are also ongoing. One thousand and five kilometres were completed between 2017 and 2020, and 739kms of asphaltic overlay have been completed between 2021 and now. Government’s target of constructing, in this second term, one thousand, five hundred kilometres (1,500kms) of asphalt overlay works is very much on course,” he said.

President Akufo-Addo urged the Ministry of Roads and Highways to put in place the necessary traffic management measures to reduce any inconvenience to the public during the construction period.

He also asked the contractor to ensure the completion of the project on time and on budget.

‘Free SHS review is constantly on the table’ – Finance Minister

‘I am deeply remorseful’ For Slapping Chris Rock-Will Smith