A Police Officer has been arrested for allegedly harassing a female victim in a video that has since gone viral.

A statement from the Police reads, “The Police Administration has seen a video in which a person in a Police uniform was captured allegedly sexually harassing a female in a car”.

“On reviewing the video, the Police Administration immediately launched an investigation into the incident.”

“Preliminary investigation indicates that the male person involved in that shameful and despicable act is a Police Officer stationed at the Regional Operations Unit, Bono Regional Command”, the statement indicated while adding that

“The Police Officer, No 51530 General Lance Corporal Victor Antwi Yeboah, has been arrested for violating the dignity of the victim and is currently assisting the investigations.”

In the said video, Lance Corporal Antwi Yeboah was captured sexually abusing a female victim in a car with the excuse that he was conducting a search on her.

“I’m not doing anything”, the Police Officer said while touching the lady’s thighs.

“You are touching me”, the victim posited.

Meanwhile, per the statement from the Police signed by ACP Kwesi Ofori, the IGP, “Dr. George has reached out and spoken to the victim and assured her of thorough police investigations and any other necessary Police support, including psychological care and trauma therapy”.

While assuring that full investigation will be conducted into the matter, the Police Administration has unreservedly apologized to the lady and to the public at large. 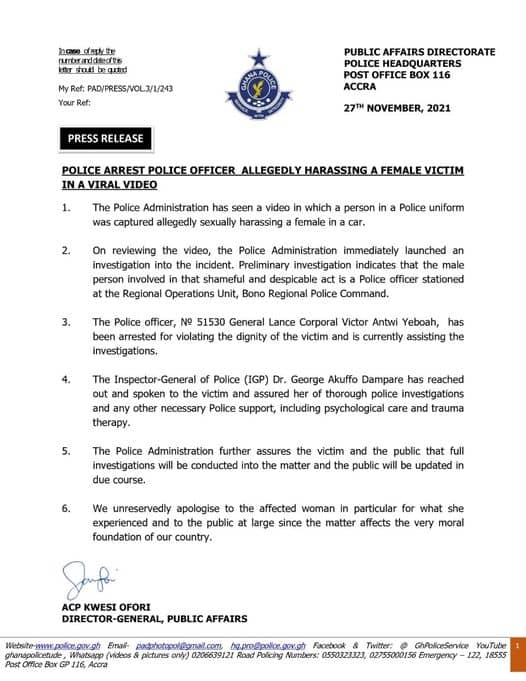