The second half of the year started quieter than usual for POCO. If last year the company brought big smartphone launches like the POCO X3 and POCO M3, this year it has only released the POCO C31 in India. However, POCO enthusiasts will soon have a new device to look at in the form of POCO M4 Pro 5G. The new handset will be a successor for this year’s M3 Pro 5G launched in May. The device’s arrival was confirmed a couple of weeks ago, and now we have details about its availability.

The POCO M4 Pro 5G already passed through multiple certification agencies across the world. As a result, we can expect the device to hit the market pretty soon. According to a fresh rumor, the new 5G mid-range smartphone will be available for international markets either in late October or early November. If it’s October, then the company should start the teaser campaign pretty soon.

The new handset will not stay limited to the European and Asian markets. We may see it also coming to the Indian market, after all, India still is one of the key markets for POCO and its parent company. Unfortunately, not many details are available about the smartphone. However, it is expected to hit the market with a MediaTek Dimensity SoC. Moreover, it will come with support for 33W fast-charging which is almost twice the amount offered by its predecessor (18W charging). 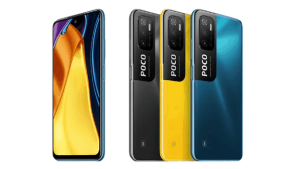 The POCO M3 Pro 5G ships with the MediaTek Dimensity 700 SoC. If we’re expecting the M4 Pro 5G to be an upgrade, then the device probably will bring the Dimensity 810 SoC that arrived to replace the Dimensity 700 series. There’s also a Dimensity 720 SoC, but that would be just an incremental upgrade. The device will likely start with a basic model with 4 GB of RAM and 64 GB of Internal Storage.

In terms of battery life, we can expect anything beyond the 5,160 mAh mark. The POCO M3 Pro 5G has a triple-camera setup, and the M4 Pro should boast a similar configuration. The device will likely come with Android 11 in too with MIUI 12.5 running on top. For now, there’s no word about a regular POCO M4 variant with just 4G LTE. Could be Xiaomi finally ditching the 4G variants in the series? We’ll find the truth soon enough.

Some of us cannot be excited talking about ‘dictatorial Nkrumah’ – Hackman