The ‘Kume Preko Reloaded’ demonstration taking place today, November 5, from the Obra Spot at the Kwame Nkrumah Circle through some principal streets of Accra has started.

The protest is led by private legal practitioner Martin Kpebu who is pushing for the resignation of President Akufo-Addo over Ghana’s current economic woes.

Some civil society organisations including #FixTheCountry, Arise Ghana, Economic Fighters League and other activists have joined the demonstrators, saying the President and his government have not done enough to alleviate the plight of citizens in the struggling economy. 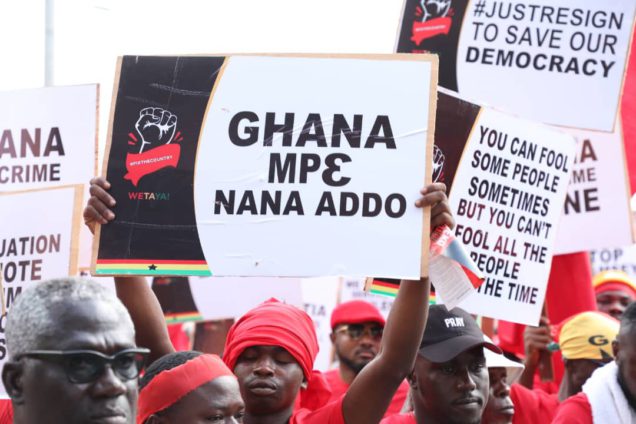 Speaking to the media ahead of the protest, Martin Kpebu said the wanton corruption and mismanagement of the economy give a clear indication that Ghanaians can no longer wait until the end of Mr Akufo-Addo’s four-year term.

He said after today’s protest, the president together with his vice ought to leave office in order to pave way for the constitutional provision for his replacement to be set in motion.

“This can’t continue. We can’t borrow all the time and have Databank becoming richer all the time. Citizens have a duty as stated in Article 41 [of the Constitution] to ask the president to resign and this is not the first time that a president of Ghana is going to resign,” Martin Kpebu said.

The demonstration, he added, will be a reenactment of the historic 1995 ‘Kume Preko’ protest against the then Rawlings administration, where Mr Akufo-Addo played a lead role.

Meanwhile, the organisers have cautioned protesters against any act that will mar the essence of the demonstration.

They said they would not countenance any act of violence, warning they would round up any person or group of persons found engaging in such acts and hand them over to law enforcement agencies.

“Today’s demonstration is going to be a peaceful one and I want to place on record that, the youth of Ghana are law-abiding and peace-lovers. No one has to look far from the three main demonstrations under ‘fix the country’ banner. All three that we’ve had were peaceful and without any incidents with the police or without.

“To those few elements who are planning to use this demonstration to cause trouble, to engage in any violent activity whatsoever, this is not the space for you, indeed, you will be rooted out on your own and handed over directly to the State institutions to take proper action against you,” Nii Ayi Opare, Spokesperson of the Economic Fighters League and a member of the Organisers, said.

The protesters converged at the Obra Spot at Kwame Nkrumah Circle at 0700hrs, and marched through the 28th February Road to Farisco Junction and then through the Liberia Road to Independence Square.

Doctors to push for salaries pegged against dollar in future negotiations