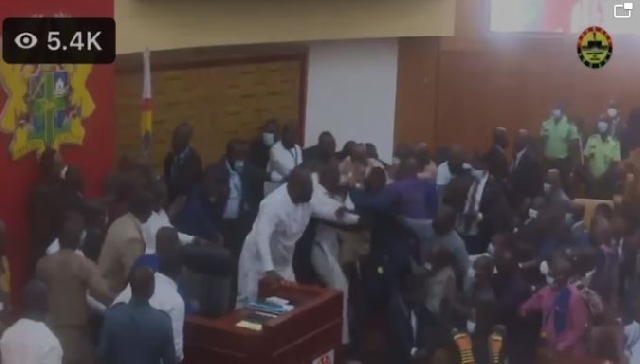 Parliament became a boxing arena on Monday night as the House voted for the 1.75 e-levy bill.

The rumpus started when First Deputy Speaker Joe Osei-Owusu, who was presiding over the business of the house in the absence of Speaker Alban Bagbin, attempted to also cast his ballot on whether or not the e-levy bill should be considered under a certificate of urgency.

MPs from either side of the house were seen exchanging blows over the matter, which threw the whole house into chaos.

Earlier in the day, the Finance Committee of Parliament approved the controversial e-levy bill.

The Minority side, made up of 12 members, voted against it while the 12 members on the Majority side voted for it.

The Chairman of the Committee voted in favour of the bill to break the tie.

This meant it had to be put before the plenary for a certificate of urgency vote.

The NDC and its Minority are against the 1.75 per cent levy which will affect electronic transactions.

Several calls on the government to drop the proposed tax has fallen on deaf ears.

The government has explained that the upsurge in the use of e-payment platforms, as a result of the COVID-19 pandemic, has been an impetus for the introduction of the levy.

As a result, Ghana recorded a total of GHS500 billion from e-transactions in 2020 compared with GHS78 billion in 2016.

The government says the e-Levy proceeds will be used to support entrepreneurship, youth employment, cyber security, and digital and road infrastructure, among others.