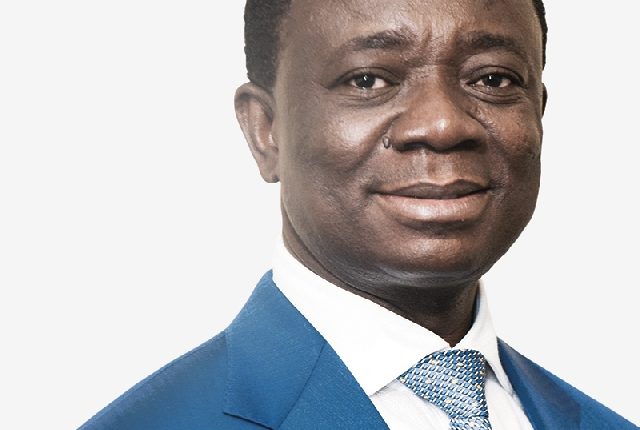 Lithovit liquid fertiliser was a “great saviour” to cocoa farmers and must be brought back, a second farmer has told the high court trying former Ghana Cocoa Board CEO Stephen Opuni and businessman Seidu Agongo in connection with the procurement of the agrochemical, which, according to the state, occasioned a loss of GHS271 million to the state.

Mr Thomas Amo Amankwaa, who is from Berekum in the Bono Region took the stand as the third defence witness for Dr Opuni.

While under cross-examination by Mr Nutifafa Nutsukpui, counsel for Mr Seidu Agongo and Agricult Ghana Limited (the 2nd and 3rd accused persons), Mr Amankwaa told the court presided over by Justice Clemence Honyenuga on Friday, 27 May 2022: “I am not here for anything but to plead with the government to bring back Lithovit liquid fertiliser because it was good for cocoa farmers”.

Mr Amankwaa disagreed with claims by the state that the fertiliser was “useless” and a waste of money, arguing: “It is not true Cocobod wasted money buying Lithovit liquid fertiliser”.

“As I have said earlier, cocoa farming is a business for [us], the farmers. That’s is why I, Amankwaa, have four farms and I am testifying with one”, he averred.

He noted: “Lithovit fertiliser helped me a lot and I bought my car and I made more money as can be seen in my passbook and I was able to buy a saloon [car]; that is a Toyota Corolla.”

Contrary to claims by the state that Mr Agongo and Agricult sold a useless product to Cocobod, thus, causing financial loss to the state, Mr Amankwaa said: “My Lord, they have not caused financial loss to Ghana, as we the farmers know because the Lithovit liquid fertiliser we, [the] farmers used, gave us a lot of yield on our cocoa farms, which we have never seen before”.

“The COCOBOD (CHED) officials that supplied us with Lithovit are aware that it [Lithovit liquid] was very good”, he added.

The witness said during the 2017/2018 crop season when he was told by Cocobod’s CHED office that the fertiliser had been seized at the head office in Accra, he went to the open market to see if he could get some but to no avail.

“My Lord, I roamed everywhere but I could not get some to buy. If you come to Berekum, the people call me ‘The Cocoa Consultant’, so, I went to the COCOBOD CHED officials with about 100 cocoa farmers with the intention of embarking on [a] demonstration to plead with the government to bring back Lithovit liquid fertiliser because it gives us good yield in our cocoa farms”, he told the court.

“The Cocobod officials told me this will not have any effect, so, we should rather go to the radio stations”, he recalled.

He said he personally went to Akonoba FM in Sunyani, as well as Chris FM, Ahenfo FM and Shallom FM, all in Berekum, to appeal to the government to bring back Lithovit liquid fertiliser because “it gave us good yield on our cocoa farms.”

The case was adjourned to Monday, 30 May 2022 for the continuation of the cross-examination.

Mr Amankwaa is not the first farmer to sing the praises of Lithovit liquid fertiliser.

On Monday, 17 May 2022, Mr Samuel Torbi, the second defence witness for Dr Stephen Opuni, told the same court that lithovit liquid fertiliser was the “farmer’s messiah” since it gave them plentiful yield.

The Assin Fosu farmer in the Central Region, who said he was born into cocoa farming but has been doing it commercially for 17 years, told the court that he first used lithovit in the 2015/2016 crop season.

He said Cocobod directly introduced and distributed lithovit fertiliser to the farmers and not Agricult Company Limited, the third accused in the case.

Mr Torbi told the court that he and other farmers were trained on lithovit by CHED under Cocobod in Assin Fosu and not Agricult who they “don’t know”.

After those two crop seasons, he said he has not harvested yields close that quantum again.

He said lithovit liquid fertiliser “widens” the leaves of the trees, gives them a “pure green” look and makes the flowers “very strong” so that they do not fall off when using the mist blower to spray fertiliser on them as the other fertilisers do.

As the chairman of the cocoa farmers’ cooperative in Assin Fosu for 12 years, he said, “when I used it, it made me happy and I did not get any negative effects about it”.

He also said “nobody complained to me but rather the happiness I had was the same happiness they [other farmers] also had and they said that it is now that they have believed that if they say that cocoa farming is a business, lithovit liquid fertiliser has made them realise that.”

He also denied claims that farmers drank the fertiliser in place of water.

”No my Lord, because the training they took us through means any agrochemicals we spray on our cocoa, when it enters our bodies, it will give us problems and, so, when we are spraying any insecticides or liquid fertiliser, we put on gloves, we also wear nose masks, we wear spectacles and we put on overalls and wellington boots and, so, if anyone tells you that you can drink lithovit liquid fertiliser when you are thirsty then that person is not a farmer and no farmer will say such a thing.”

Asked what he made of claims that the fertiliser was of no value, he said: “Farmers will never forgive that person because Lithovit liquid fertiliser is a farmers’ messiah and I also don’t believe that any staff from COCOBOD will come out and say such a thing”.

Asked if there will be any justification to condemn the company or the person who brought the fertiliser, Mr Torbi said: “No, my Lord because we need it”.