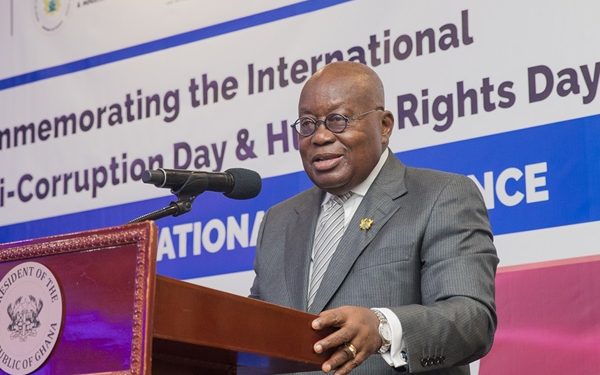 Nobody can prove my government has wasted public funds – Akufo-Addo

President Nana Addo Dankwa Akufo-Addo says prudent management of the Ghanaian economy has made it possible for government to meet the development demands of Ghanaians.

He says allegations of wanton dissipation of public funds are untrue and no one can prove such claims against his government.

Speaking at an anti-corruption conference in Accra, Nana Akufo-Addo said his government has made significant investment in all aspects of the economy than all other presidents in the fourth republic.

“My government has spent a lot of money on education, health, infrastructure particularly roads, agriculture, industry, security services and the anti-corruption institutions than by any other government in the fourth republic if not in the entire history of Ghana. Furthermore, after all these expenditures, my government was still able to find some GHS25 billion to pay for the refund of depositors monies arising from the financial sector crisis. These expenditures indicate clearly what taxpayers monies and the revenues of government has been used for by the Akufo-Addo government,” he said.

He added that, “it is difficult to sustain any serious argument about the wanton dissipation of public funds in my time as president.”

The Akufo-Addo administration has come under fire for what many say is poor management of the economy leading to economic hardship.

But President Akufo-Addo insists that such claims are baseless.

Fuel prices can easily be reduced to ₵6; it depends on government – Senyo Hosi