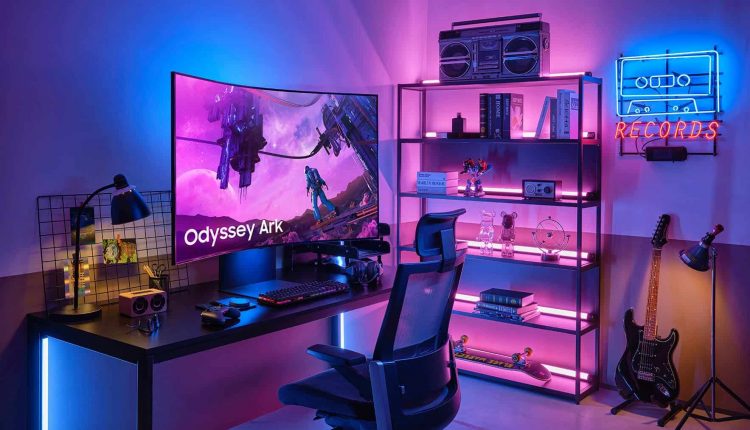 However, there are some differences between these four. For instance, the Samsung Odyssey G70B and G65B are designed for PC gaming. Also, the G70B version is available in 27- and 32-inch flat IPS options with 4K support at 144Hz and 1ms gray-to-gray (GtG) response times. At the same time, the G65B model is a curved monitor (1000R) with the same 1ms GtG response times. It comes in 27- and 32-inch sizes as well. Both support 1440p resolution as well as a 240Hz refresh rate. Unfortunately, the manufacturer doesn’t tell whether the latter uses IPS, VA, or TN. However, when looking at other curved models on the market, it likely, will be VA. As said, the selling point of these Samsung gaming monitors is the built-in Gaming Hub. With its help, users will get quick and easy access to game streaming services. Plus, there’s a new Game Bar tool. The latter allows PC gamers to view gaming settings and modify response times, screen ratios, and game modes easily.

What makes these Samsung gaming monitors stand out is that they can be without a PC. For this, they come with Samsung’s Smart Platform integration. In general, the connectivity options include connection to PCs or Macs, iPhone or iPad screen mirroring through Apple AirPlay 2, and Samsung DeX.

We guess most of you will use them for watching videos. So that’s logical Samsung has decided to sell the displays with Netflix and Amazon Prime apps pre-installed.

At the moment, we do not know all specs of the monitors, and there is no info on prices. But the company said these gaming monitors would be available globally in Q4