The main opposition National Democratic Congress (NDC) should say goodbye to the presidential elections in 2024 following the kind of changes they have made to their leadership in Parliament, Director of Communications for the New Patriotic Party (NPP) Mr Richard Ahiagbah has said.

He has also been replaced with Ellembelle Member of Parliament Kofi Armah Buah. “The NDC should kiss the Tamale South, Ketu North, and Asawase seats, and the 2024 Presidential elections goodbye.

“The NDC preaches virtue and practices vice,” he tweeted.

Following the changes in the Minority leadership, the National Chairman of the National Democratic Congress, Johnson Asiedu Nketia explained the reasons behind the decision.

He stated that the key topics that come up for debates lately centre on the economy, energy and infrastructure.

To that end, he said the party felt it necessary to get their best men who are on top of these issues forward.

He told journalists on Tuesday, January 24 that “The debates and the other discussions will focus on the economy so you need to put your best man in the economy forward, that is what we have done.

“We also looked at energy. These petroleum and electricity challenges and so we needed to settle on Kofi Armah Buah, our former Energy Minister to be the deputy minority leader and then the other area is infrastructure, Kwame Agbodza being our man in infrastructure should play a key role. So that generally is what informed the changes.”

Some Members of Parliament for the NDC raised concerns against the changes.

For instance, MP for Agotime Ziope,  Charles Agbeve has demanded explanations into the decision by national executives of the National Democratic Congress (NDC) to change the leadership of the Minority in Parliament.

Mr Agbeve said the NDC lawmakers were surprised following the announcement of the changes because consultations were not done on this matter.

He told TV3’s Komla Kluste in an interview that “I am flabbergastered, the news hit me because it is one of the last news I am expecting at this time, and so I am surprised.

“There are issues when they come up, leadership thinks let us take some advice from the national executives and then they give the direction. So one would have thought that if there is going to be a shake-up like this, there would have been some engagements and that engagement would have watered down the shock and surprise.

“You will know there is going to be some changes here and there and then people will make inputs and suggestions but this was not done and I will like to know what went into this thinking, I will want some explanations, that will give all of us reasons to support it. ”

The General Secretary of the National Democratic Congres (NDC) Fifi Kwetey explained the reason for the changes.

He stated that the decision is to reposition the party for the elections 2024.

‘It has become necessary for you to deploy you from your current position as Deputy Minority Leader with immediate effect,” a statement signed by General Secretary of the party Fiifi Kwetey said on Tuesday, January 24. 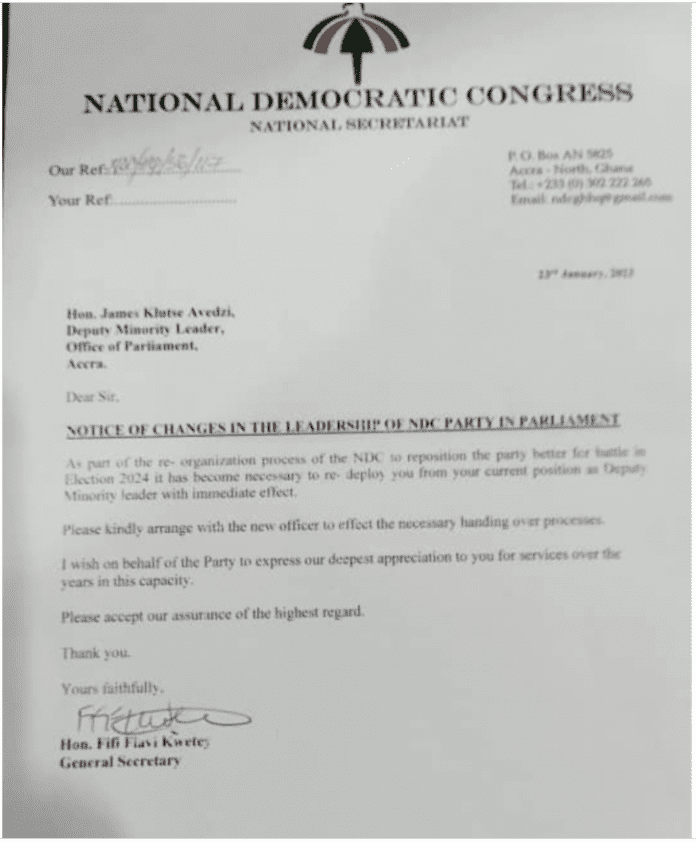 “I wish on behalf of the party to express our deepest appreciation to you for your service over the years in this capacity,’ the statement added.

It further said ” please kindly arrange with the new officer to effect the necessary handing over processes. Please accept our assurance of the  highest  regard.”