The National Communications Authority (NCA) says it has approved the grants of a total of one hundred and thirty-three FM radio broadcasting authorisations. This number includes “new applications from entities whose FM radio stations were closed down after the 2017 FM Audit as well as existing stations which applied for renewal of their expired FM Radio broadcasting authorisations”.

This was contained in a press release issued by the authority today, Tuesday 12th October, 2021.

“The Governing Board of the National Communications Authority (NCA), at a Board meeting held on 11th October, 2021, approved the grant of a total of One Hundred and Thirty Three (133) FM radio broadcasting authorisations which include new applications from entities whose FM radio stations were closed down after the 2017 FM Audit as well as existing stations which applied for renewal of their expired FM Radio broadcasting authorisations”, the statement read.

According to the authority, the “approval from the Board is subject to the applicants attending a sensitisation workshop on the terms and conditions of FM radio broadcasting authorisations.”

It says the workshop “shall clarify the legal, regulatory, and technical requirements for the establishment and operation of an FM Radio Broadcasting station” after which provisional authorisations shall be issued to the successful applicants and frequencies “assigned to the applicants only upon the fulfillment of the conditions of the Provisional Authorisation”.

“The general public is reminded that per Section 2(4) of the Electronic Communications Act, 2008, Act 775, a person shall not operate a broadcasting system or provide a broadcasting service without a frequency authorisation by the Authority. Offenders are liable on summary conviction to a fine of not more than three thousand penalty units or to a term of imprisonment of not more than five years or to both, as per Section 73 of Act 775 of 2008”, the statement added.

In September, 2017, the NCA sanctioned 131 FM Authorisation Holders found to have committed various infractions pertaining to their authorizations to operate as contained in Section 13 of the Electronics Communications Act (2009), Act 775.

34 of the sanctioned stations had their licences revoked because their authorizations had expired and were operating illegally.

A further 13 FM Authorisation Holders were issued with reprieves as pertains to their authorisations.

Below is the press release: 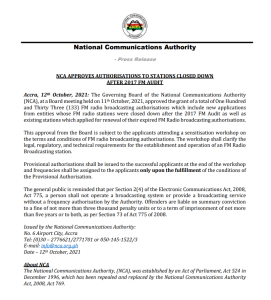