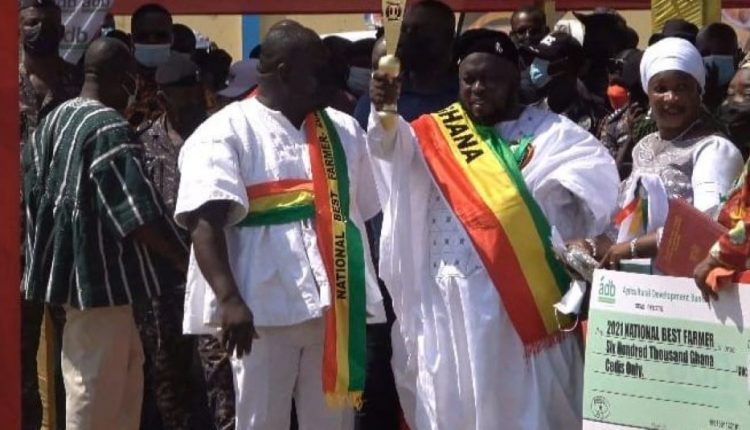 Alhaji Mohammed Mashud, a 44-year-old farmer from Mion District of the Northern Region has been crowned as the National Best Farmer 2021.

This year’s National Best Farmer Day Awards, the 37th edition, was held at the Adisadel College Park in the Central Region of Ghana. It was organised under the theme: “Planting for Food and Jobs-Consolidating Food Systems in Ghana”.

The first runner-up award went to Suleman Yidana from the North East Region. For his prize, he received a tractor with a disc plough, a sprayer, GH¢200,000 insurance cover, and a study trip to Israel.

The Best fisherman award went to Mr Kweku Ehun of the Gomoa East District of the Central Region. He will receive a two-bedroom house to be built at a location of his choice.

In all, over one hundred and sixty (160) farmers were awarded in various categories.

The National Best Farmer Awards Ceremony was established to reward hard-working and gallant farmers and fishers of the country for their commendable and meritorious contribution to the nation’s food security.

The ceremony was chaired by Osabarimba Kwesi Atta II, the Omanhene of the Oguaa Traditional Area with President Nana Addo Dankwa Akufo-Addo being the guest of honour.

The Minister for Food and Agriculture, Dr. Owusu Afriyie Akoto, Minister for Fisheries and Aquaculture Development, Mavis Hawa Koomson, and other dignitaries were there to grace the occasion.

The awards ceremony was preceded by a five-day agricultural fair, which saw a number of farmers exhibiting different kinds of farm produce.

Read also: ‘It is a wrong perception that food prices have increased; our statistics do not support it’ – Agric Minister