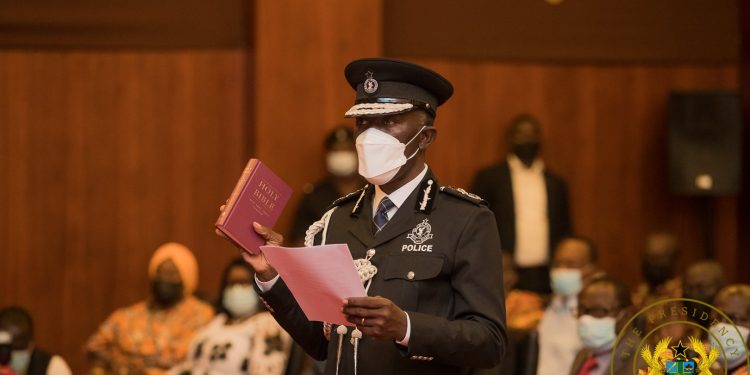 The swearing-in and confirmation ceremony was held at the Jubilee House on Friday, October 8, 2021.

Until today, Dr. Dampare was acting in that capacity for the last two months, having been promoted from his previous role as the Director-General in charge of Administration at the Ghana Police Service. 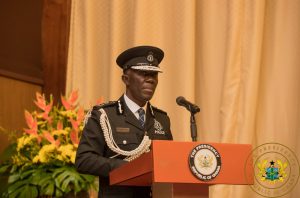 COP Dampare, 51 is Ghana’s  23rd IGP. He is also the youngest IGP to be appointed in the Fourth Republic and the eighth youngest since Ghana gained independence.

Present at the short ceremony were Vice President Dr. Mahamudu Bawumia, high-ranking officers of the Police Service, and other dignitaries.

The Police Service has introduced a number of reforms since the appointment of COP Dampare. 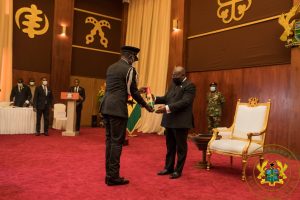 Just recently, the Police Service said it was introducing some security measures to curb robberies in the country.

The Service has also arrested some influential persons flouting the laws since COP Dampare took over office.

A few weeks ago, the Service interdicted four police officers for assaulting some residents in Tamale. 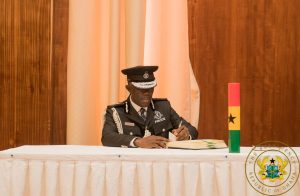 The Service for the first time in recent years apologized to media personnel when some of them were heckled at the precincts of the court when popular preacher, Ernest Owusu Bempah was arrested and sent to court.

Police visibility and communication with the public have tremendously improved under his tenure so far.

President @NAkufoAddo has sworn in Dr. George Akuffo Dampare as the substantive IGP.

The swearing-in and confirmation ceremony was held at the Jubilee House on Friday, October 8, 2021.

In the meantime, President Akufo-Addo praised the new IGP and asked him to clamp down on crime and other social vices in the country. 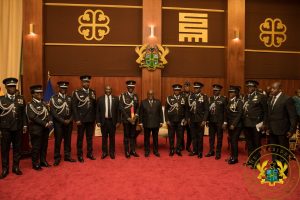 The President said the government will provide the needed support and logistics to make the work of the new IGP easy.

“I congratulate Dr. Dampare warmly on his appointment I say, with no hesitation, that it is a well-deserved one.

He will be walking in the footsteps of the 22 previous occupants of the position. I have no doubts that he will be a worthy successor to James Oppong Boanuh.” 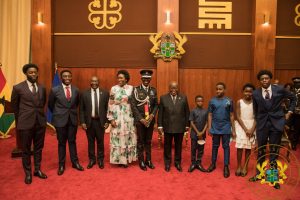 On his part, the newly sworn-in IGP, Dr. George Akuffo Dampare promised to work hard to change the public perception of the Ghana Police Service.

“I want to give the assurance that working with my colleagues within the police service and outside it and then getting the support of the population, we lead the service better than we came to find it”, Dr. Dampare said. 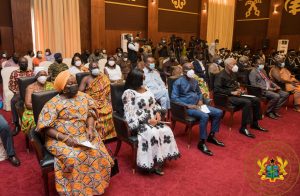 Tesla will move its headquarters from California to Texas