Music producer and sound engineer, Joseph Kwame Addison, popularly known as KillBeatz has been robbed in the United Kingdom.

In a Facebook post sighted by Ghana News Avenue, Killbeatz said his car which was packed at “the doubletree Hilton in Ealing” was broken into on Saturday night by thieves who made away with a laptop, hard drives, passport and an undisclosed amount money.

“I’m here from Ghana working so laptop is needed and my passport is needed so I can make my return back to Ghana”, he wrote.

“Happy to give a reward for the return of my items”, he added.

KillBeatz started as a rapper and later switched to music production. He got the name KillBeatz from Ghanaian rapper Omar Sterling (Paedae) of R2Bees fame.

He has worked with artists like Sarkodie, Efya, R2Bees, Wizkid, Ed Sheeran, and Fuse ODG, among others.

The various genres of music he produces for include highlife, hiplife, Azonto and Afrobeats. In 2012, KillBeatz contributed heavily to the Azonto music genre by producing beats for a lot of Azonto songs during its prime. 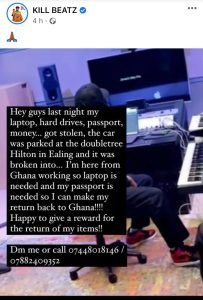 Thomas Sankara Annual Conference to be held on October 17, 2021

3 arrested for killing a man whose corpse they attempted to sell for GHS 7,000