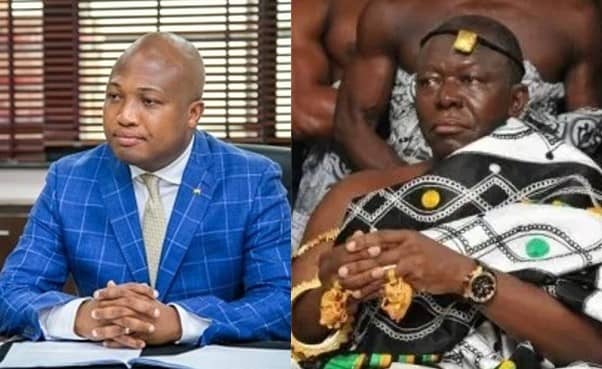 “MPs who exercised their oversight mandate in the past were hailed as nationalists, those who do now must be cast in different light” – Ablakwa

At the launch of the Otumfuo Osei Tutu II Commemorative Gold Coin on Sunday, December 12, 2021, the Asantehene waded into the controversies surrounding the approval of the 2022 Budget Statement and Economic Policy.

He said there was no way the government can raise revenue to meet the demands of Ghanaians except through taxes. He, therefore, advised members of parliament (MPs) to desist from using their entrenched positions to frustrate the government in the performance of its legitimate duties.

“We elect people to represent us to make sure there is some equilibrium in what governments do. It is to our good that our representatives in Parliament subject the national budget to the most rigorous scrutiny and to call for changes”, the revered Asantehene said, while adding that

“Government must also have the humility to acknowledge and embrace the useful inputs from all sources, but our representatives need to bear in mind that it is not their role to either determine policy or to frustrate the executive from performing their legitimate duties.”

But in a Facebook post, the minority MP has given reasons why it is in the nation’s interest to properly scrutinize the budget.

He touts the minority’s resilience in the past which lead to their opposing government’s dubious policies like the “Ameri, Agyapa, Aker, Oslo Chancery, PDS, inflated 2018 Ministry of Special Development Initiatives Budget”.

“Let history reflect that my colleagues and I are proud to belong to the group of MPs who “frustrated” Ameri, Agyapa, Aker, Oslo Chancery, PDS, inflated 2018 Ministry of Special Development Initiatives Budget, GHS242million dubious e-Transaction Levy Services, and still determined to “frustrate” the obnoxious E-Levy”, part of the post read.

“I have no doubt President Akufo-Addo is much the same way proud of how he and his collaborators in and outside of Parliament during their good old days “frustrated” the introduction of VAT not only in the chamber but on the streets with the famous “kumepreko” demonstrations.”

“The Kyei-Mensah-Bonsu-led opposition era certainly look back with great pride for “frustrating” a number of matters they felt strongly about including boycotting President Mahama’s message on the state of the nation and boycotting the vetting of his ministers on the instruction of party leaders as they pursued their legal challenge of the 2012 election outcome”, Hon Ablakwa pointed out.

The former Deputy Education Minister indicated that “Parliaments exist in a democracy as a countervailing force to keep the executive in check and curb impunity”.

“When other MPs exercised their oversight mandate in the past, they were hailed as nationalists; those who do same now must not be cast in a different light.”

“Good conscience, genuine feedback from our constituents and the supreme national interest shall continue to be our raison d’etre”, he added.

We’re not obstructing gov’t; ask them to do the right thing – Minority to Otumfuo

Minority fumes over GHC32m spent on conferences even under COVID