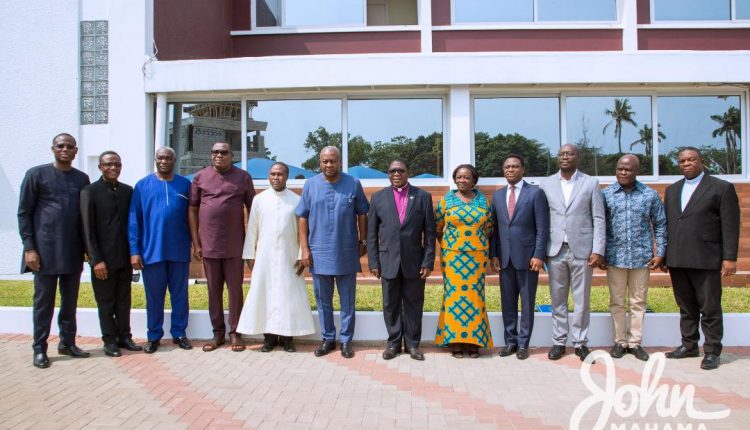 Former President John Dramani Mahama has described the incidents and actions taken by the Minority group in Parliament before the House went on recess in December 2021 as a “fight for democracy”.

Tussle broke out following what the National Democratic Congress (NDC) MPs say was an unconstitutional action by the First Deputy Speaker and which was also contrary to the Standing Orders of the House, during the debate and voting on government’s Electronic Transfer Levy (E-Levy).

Speaking during a meeting called at the instance of a delegation from the leadership of the various church groups and associations in his office in Accra, the former President told the Christian leaders that the resistance of the Minority group, which led to the brawl was a fight for democracy, and to prevent unconstitutionality.

Mr. Mahama told the church leaders, who said they were on a “peace mission” to find a resolution to “what is happening to us in our country”, that Ghanaians have made it clear that they do not want the E-Levy, and the Minority group’s push back is a reflection of what the people want.

Led by the Most Reverend Paul K. Boafo, Presiding Bishop of the Methodist Church, the delegation included representatives from the Christian Council of Ghana, the Ghana Pentecostal and Charismatic Council, and the Catholic Bishops Conference.

Most Rev. Paul Boafo told the former President who was joined by the National Chairman of the NDC, Samuel Ofosu Ampofo, NDC 2020 Running Mate Professor Naana Jane Opoku-Agyemang, Dr. Ato Forson (MP for Ajumako Enyan Esiam) and Ahmed Ibrahim (MP for Banda) that they were on a peace mission.

“We have come as heads of churches of the various associations and groupings in Ghana. As major stakeholders, when things become of concern, we are all to take it up and see how best we can find answers and resolutions.”

“Getting to the last quarter of last year, we all experienced what our country has never experienced before. It came to the hilt when they [MPs] were about closing with the introduction of the budget and E-levy… and there were exchanges resulting in some fight and all that. The churches or the Christian bodies became alarmed, and we said we will not sit [for such things to continue]…”

Reacting to the remarks, Mr. Mahama said, “that fight was a fight for democracy. There is no way a Speaker can sit in the chair, relinquish the chair, let somebody else come and sit in it and take a vote in something that he has presided over. The constitution is clear”.

The former President disagreed with suggestions that the Minority should have allowed the process to continue to prevent the fracas.

“It was felt that our MPs should sit timidly and let them pass this unconstitutionality. It won’t happen”, he stressed.

“There is a lot that is happening in this country that if we don’t intervene, it would upset our democracy. The Fourth Republic has been the most enduring, and we must protect it,” he added.