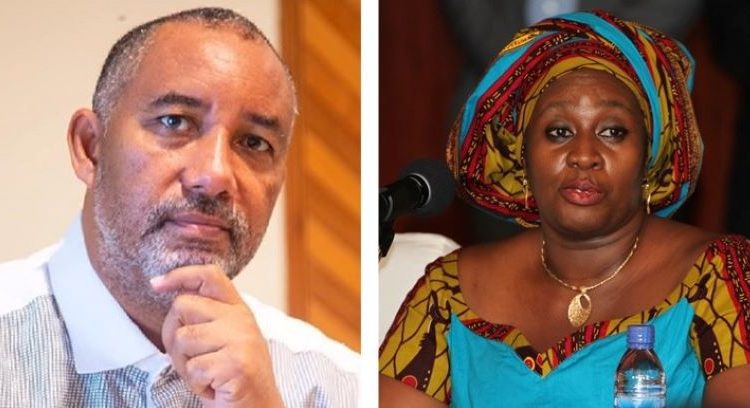 The two sureties who executed the GHc5M bail conditions for the former CEO of Microfinance and Small Loans Centre (MASLOC) were ordered to produce the accused today, December 22, 2022.

The Financial and Economic Division of the Accra High Court presided over by Justice Afia Serwah Asare-Botwe, now elevated to the Court of Appeal held that, the former MASLOC boss has “absconded.”

In court on Thursday, December 22, when the case was called one of the defence Lawyers Beatrice Annan-Fio, for Gavivina Tamakloe said “We have exhausted every effort within our means but we have not been able to produce the first accused person.”

She, therefore, prayed the court to oblige them more time to be able to produce the accused whom is said to have undergone some medical procedure.

Justice Afia Serwah Asare-Botwe, who was one of 15 newly sworn-in Justices of the Court of Appeal by the President yesterday, said “I will give you time.”

While making a biblical allusion she said the Bible calls for fulfilment of righteousness and that “I can only give you time after the Christmas.”

The newly promoted Justice of the Court of Appeal said “You have until the holiday are over to produce the accused or provide a compelling evidence why you need more time to produce accused.”

According to EIB Network’s Legal Affairs Correspondent, Murtala Inusah, the court said failure to do so, the court will take a decision that “we all may not like.”

The case has since been adjourned to January 17, 2023 for the sureties to produce the first accused person.

Daniel Axim, the second accused person was present in court.

The accused person has for the past a year (October 2021) failed to appear in court for the trial to progress after she was given permission by the court to travel out of the country for a medical examination.

Ruling on an application for forfeiture of recognisance of sureties filed by the Attorney General’s department, Justice Afia Serwah Asare Botwe said, it is clear that the accused is no longer reasonably missing the trial for medical reasons.

The court said the sureties have since stopped bringing any medical letters to the court on the accused person.

Justice Asare-Botwe said the accused person had breached the terms of her bond and a liability accrues on the sureties.

Justice Afia Asare-Botwe, said, Forfeiture of bail bond becomes effective the moment the accused person jumps bail and the surety is unable to produce him or her.

The court said, it has drawn the conclusion that Mrs Attionu Tamakloe who is standing trial with one another has absconded as she has not shown up at the time she was supposed to.

The court also said, “the authorities have also made it clear that, if this happens you should give the sureties time to produce the accused person.”

Consequently, the court said, “I have given the sureties on or before 22 December, 2022, to produce the accused person.”

The court is expected to consider the application for trial in absentia if the accused failed to show up.

Moving the application for Forfeiture of recognizance of the sureties, Stella Ohene Appiah, a Principal State Attorney argues that the Ex MASLOC Boss having failed to return for the trial after being given leave to travel simply means that she has abandoned.

The lawyer for Gavivina said the application for the release of the passport to the accused person was not sent to him and he had no idea.

He added that the State did not oppose the application so he cannot be held responsible for her absence and that, the State has all the apparatuses to ensure the accused attends court.

The lawyer for Alex Mould, Dr Abdul Aziz Bamba argued that the State should take action to extradite the accused to come down and face trial.

He added that he is informed the accused is unwell and is seeking medical assistance in the States.

He argued that the Supreme Court has ruled that the court cannot commit a surety to prison and that, the execution of bail bond is a contract and one cannot put one in prison for failing to fulfil a contract.

Sedina Attionu is on trial with Daniel Axim, a former Operations Manager of MASLOC, on 78 counts of wilfully causing financial loss to the State, stealing, and contravention of the public procurement act, among other charges.

The two have denied any wrongdoing and have pleaded not guilty to all the charges.

The prosecution has accused Mrs Attionu of engaging in some illegalities leading to the alleged stealing and financial loss.

For instance, it has accused Mrs Attionu of embezzling GH¢500,000 that was paid by a company which benefitted fro m MASLOC support in 2014.

It is also the case of the prosecution that in 2013 following a fire disaster at the Kantamanto Market, then-President John Mahama directed MASLOC to provide assistance of GH¢1.46 million to victims of the disaster but Mrs Attionu embezzled part of the money.