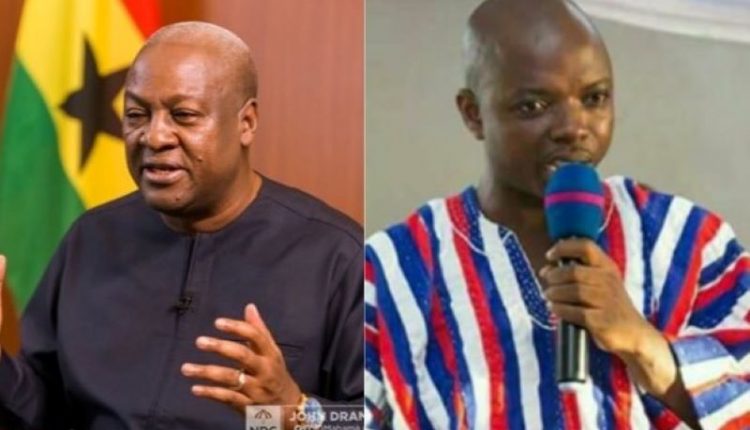 The Bono Regional Chairman of the New Patriotic Party (NPP), Kwame Baffoe also known as Abronye DC has taken another dig at former President John Dramani Mahama insisting that the former first gentleman of the land received GH¢14 million as ex-gratia in 2013.

He thus challenged former President John Dramani Mahama to refund monies received from the state within the period if he believes Ghanaians are really suffering.

The NPP Bono Regional Chairman had earlier accused Mahama of receiving the fattest ex-gratia in the country’s history.

The former President has denied such claims.

“We urge the public to ignore the unintelligent rants of the said Kwame Baffoe who has gained notoriety for fabricating and propagating falsehood on behalf of Nana Akufo–Addo against John Mahama. His claims are false,” a statement from the office of the President said.

Abronye DC in his latest statement insisted that the former President received the said amount.

“Let me reiterate my position that Mr. John Mahama indeed received GH¢14 million as ex gratia in 2013 which was credited into his Agricultural Development Bank Account.”

He further indicated that although the former President is on retirement, he “still receives benefits such as state-provided staff not exceeding four (4) including Joyce Bawa Mogtari and Felix Ofosu Kwakye who receive GH¢ 9,000 every month as allowances and a furnished and up-to-date office.”