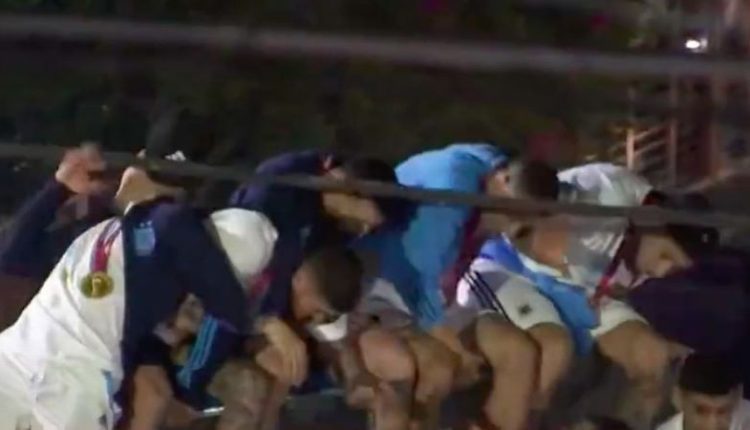 Lionel Messi carried the World Cup trophy onto an open-top bus after arriving back in Buenos Aires, but there was almost a serious accident during the victory parade

Lionel Messi and his teammates landed at Ezeiza International Airport in Buenos Aires shortly after 2am local time on Tuesday. Thousands of fans were waiting for them, lining the streets to get a glimpse at the World Cup trophy.

After climbing off their flight from Rome, the squad boarded a customised coach on a journey to the Argentine Football Association (AFA) training centre. The bus left the airport and entered streets packed with fans, who turned out to celebrate the country’s third World Cup triumph and first since 1986.

Messi was sitting at the back of the top deck of the bus alongside teammates Leandro Paredes, Rodrigo De Paul, Angel Di Maria and Nicolas Otamendi when they very nearly sustained an injury to the head. The bus passed underneath an overhead cable and nearly collided with the star players.

Four of the players ducked swiftly to avoid the collision, but Paredes only just got his head underneath in time and lost his cap. The incident appeared to be quickly forgotten about as the coach continued on its journey, but it was a near miss.

The party continued along the route from the airport, with striker Lautaro Martinez playing a giant drum and players joining in with fans’ songs. The crowds waved the Argentina flag, cheered and clapped as the bus passed by.

After visiting the AFA training centre, the players will then embark on another more official bus tour later on Tuesday. The Argentine government has declared the day a national Bank Holiday to allow fans to take part in the celebrations.

A huge party will take place, centred around Buenos Aires’ famous Obelisk monument. More than a million people turned out on Saturday night to toast the players after they triumphed on penalties against France following a dramatic 3-3 draw.

As captain and star player, Messi will take centre stage for the celebrations. But manager Lionel Scaloni will also take national treasure status after avenging the defeat in the 2014 World Cup final.

“I’m proud. I’m less excited than other days but today I’m free. This team only makes me proud, it’s all theirs,” Scaloni said. “I want to tell people to enjoy because this is a historic moment.

“It’s a time to enjoy. We’re used to being hit, that’s why we know how to be through thick and thin. Being at the top is something unique, an incredible enjoyment.

“My dad and my mum taught me never to give up, not to go against anyone and always push forward. I was lucky to be here and I am grateful.”