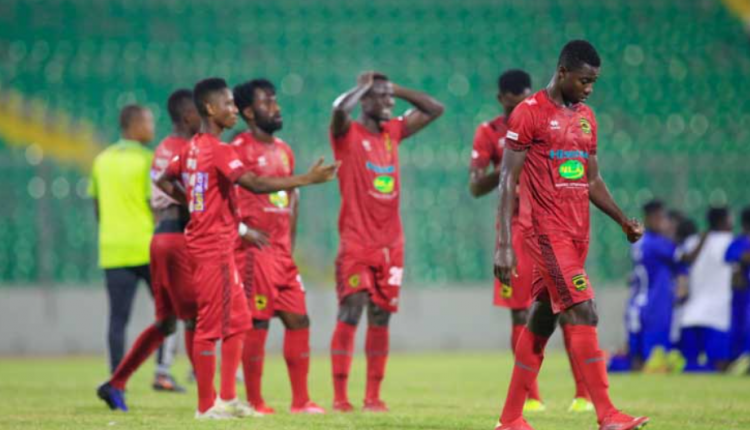 Asante Kotoko suffered their first back-to-back league defeats of the season when they were shocked 3-1 at home by former manager Maxwell Konadu’s Legon Cities.

Kotoko were expected to return to winning ways after falling to Real Tamale United in the Northern Region last week.

However, they were second best in their own backyard, as Cities secured a famous win to move further away from the relegation zone.

Michel Otou converted a controversial penalty to put Cities ahead after 17 minutes.

But Kwofie scored his second and Cities’ third goal immediately after the break to seal the victory and condemn Kotoko to their second home defeat of the season.

Despite the loss, Kotoko remain eight points clear at the top, but their lead could be cut as second-placed Bechem United hosts Karela United on Monday.

RTU moved out of the relegation zone after a crucial draw against bottom-placed Elmina Sharks at Nduom Sports Complex on Sunday.

Victor Aidoo scored within the first five minutes, but Michael Asamoah equalized for the Sharks.

Neither team could find a winner, as Sharks edge closer to the second-tier of Ghana football.

WAFA lost 1-0 at Medeama after conceding a penalty in the second half, which was converted by Vincent Atingah. As a result, WAFA have dropped back into the relegation zone.

King Faisal held Dreams FC to a 1-1 in Dawu. The Kumasi-based club’s first point since late February, putting an end to their seven-game losing streak.

Gold Stars secured another home win as they beat Eleven Wonders by a lone goal.