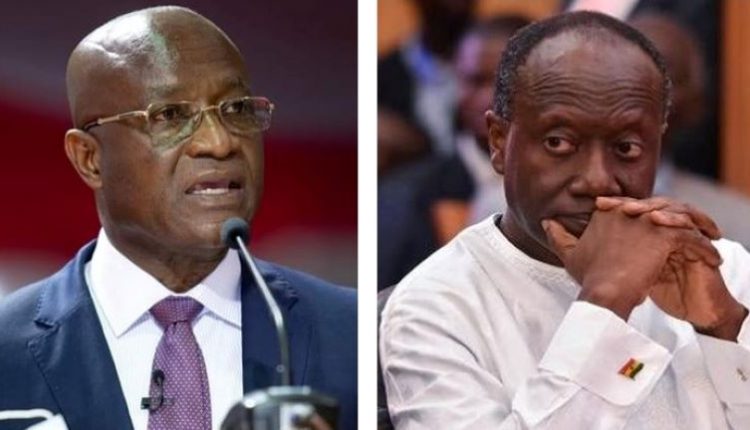 Kyei-Mensah-Bonsu to be Finance Minister?

Even before the fate of Ken Ofori-Atta is decided, intelligence picked up suggests that some people are fiercely lobbying to replace him.

This suggests that the agenda to force the president to sack Ofori-Atta is an orchestration by some who aspire to become Ghana’s next Finance Minister.

As a group, the Members of Parliament (MP) who are demanding Ofori-Atta’s removal have not provided names of possible replacements.

But they have declared openly that they want one of their members to replace him.

They said the Majority Leader will not reject the appointment if President Akufo-Addo offered it to him.

But an informed source went even further to say that Kye-Mensah-Bonsu actually wants the position.

Kyei-Mensah-Bonsu had earlier stated that he is qualified to be a vice-presidential candidate.

He said he is more than qualified to partner with either Dr Mahamudu Bawumia or anyone who emerges as flagbearer of the New Patriotic Party (NPP) in the 2024 elections.

Kyei-Mensah-Bonsu is on record to have stated that Vice-President Mahamudu Bawumia is the best person to lead the NPP into the next elections scheduled for 2024.

He joins other Ashanti aspirants such as Joseph Osei-Owusu, MP for Bekwai, Dr Matthew Opoku Prempeh, MP for Manhyia South and Dr Yaw Osei Adutwum, MP for the Bosomtwe.

Eugene Boakye Antwi, the MP for Subin in the Ashanti Region who is a leading member of the MPs seeking Ofori-Atta’s removal that held the press conference has said they want a parliamentarian as a replacement.

“We as NPP members will be urging President Akufo-Addo to bring us an MP, somebody who understands the work of parliament, somebody who is going to be with us,” he stressed.

Eugene Boakye Antwi’s disclosure reveals why the MPs did not demand the sacking of the two deputy ministers of finance Dr John Kumah, MP for Ejisu in the Ashanti Region and Abena Osei-Asare, MP for Atiwa East in the East Region.

Kyei-Mensah-Bonsu and his supporters will see such an appointment as a recognition of his commitment and loyalty to the NPP and his long service in parliament.

Sources said Kyei-Mensah-Bonsu doesn’t want to stop there. “He actually wants to use the finance minister portfolio to position himself to become running mate to the Vice-President, should Dr Mahamudu Bawumia become the NPP’s flagbearer,” the source said.

According to analysts, he knows his parliamentary career is over because he can’t win the constituency primaries, but he doesn’t want his political career to end.

But does he have the capacity to take the helm at the Finance Ministry, especially in this time of economic crisis? He once read the budget statement in the absence of Ofori-Atta, but analysts say anyone could have read it.

Kyei-Mensah-Bonsu first became an MP in January 1997 and is currently the longest-serving MP in Ghana.

He has kept his seat since then, representing his constituency in the 2nd, 3rd, 4th, 5th, 6th and 7th Parliament of the 4th Republic of Ghana.

He is the chairperson for the Special Budget, House, and Business Committees.

Others have also pointed to Mark Assibey Yeboah, a former MP who was the chairman of the Finance Committee in Parliament between 2017 and 2020.

Assibey Yeboah lost the seat to Michael Okyere Baafi, a man believed to be an Akufo-Addo loyalist.

Insiders say Assibey Yeboah may not get the backing of the MPs.

In the Fourth Republic which commenced on 7 January 1993, Ghana has been to the International Monetary Fund five times.

Despite this record of every government in the fourth republic going to the IMF to fix financial challenges, no finance minister was fired for taking the country to the Fund.

In respect of the last IMF programme Ghana secured on 3 April 2015, there were calls for the then Finance Minister Seth Terkper to be sacked but President John Mahama did not sack Terkper.

The NPP MPs want Ofori-Atta and Charles Adu Boahen, a Minister of State at the Finance Ministry dismissed but after a meeting with President Nana Akufo-Addo it was agreed that the dismissal is put on hold till the two complete some important national assignments.

They are to continue to superintend over negotiations with the International Monetary Fund (IMF) and secure a deal.

They will also complete the preparation of the 2023 Budget Statement and Economic Policy for 2023 which Ofori-Atta will present to parliament next month.