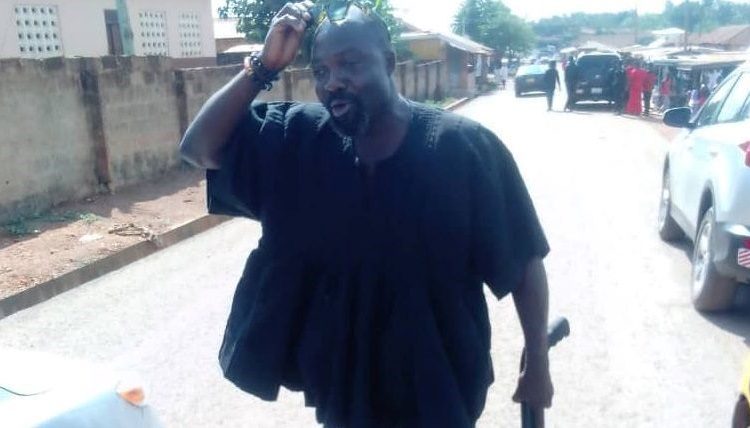 The Chief of Akyem Kade Osabarima Agyare Tinadu II is disgusted by Ghc5000 fine awarded against the accused person who attempted to shoot him at a funeral ground on September 10, 2022.

The 42-year-old man and his accomplices had earlier scattered chairs at the funeral ground and pushed down the stool of the chief.

Upon arrival of the Chief of Akyem Kade Osabarima Agyare Tinadu II and his entourage at the funeral grounds, the gunman appeared on the dais where the Chief and elders were heading to sit

He pointed the gun at the Chief saying

“if you step foot on the platform to sit I will shoot you “.An eyewitness quoted the suspect.

The suspect daringly started firing warning shots indiscriminately forcing almost everybody at the funeral to run helter-skelter for safety leaving the Chief and his entourage of elders to their fate.

However, the police CID arrived at the scene to arrest the suspect but granted bail after few hours.

He was arraigned before Kade Circuit court on Tuesday, September 13, 2020, on two misdemeanor charges of discharging gun in town and offensive conduct conducive to breach the peace.

The facts presented to the court by the Police prosecutor are that the accused Forson Osei, is a miner and resident of Kade

Police said on the fateful day, at about 2:30pm police had information that there was disturbance at the durbar ground where bereaved families and mourners were holding funerals.

Police went there to disarm and arrested the accused person and retrieved one discharged cartridge.

Police also retrieved five(5) rounds of BB cartridges from the accused during a search at the police station.

Police said further investigation revealed that the accused blocked the Chief and his elders from sitting at the podium and fired three warning shots.

The accused however admitted discharging the weapon but alleged he fired in one round.

The Chief of Kade accused the police of deliberately presenting a weak case to mitigate punishment against the accused who is linked to the opposing faction.

He said the Kade police refused to inform him(complainant) about the court date.

The Chief has petitioned the police administration on the matter.