Intel Core i5-13600K has a remarkable performance in multi-thread

The launch of the new Raptor Lake-S desktop platform from Intel is upon us, the range is almost completely defined and in essence we shouldn’t have big surprises regarding the models compared to the current Alder Lake-S (Core 12th gen) models. In recent weeks there has been no lack of news on Core 13th gen processors; especially for the top of the range Core i9-13900K; spotted on several occasions that have confirmed the main peculiarity of these chips. An increase in the number of E-Cores with a consequent increase performance in multi-thread.

Today we have some benchmarks of the Core i5-13600K, heir to the excellent Core i5-12600K and very promising despite being still in the engineering phase (ES3 to be precise).

The new data comes from the Bilibili forum and, needless to say, are not definitive despite the useful information shared. Assuming that the clock rates and consumption may not be those of the retail variant, we immediately note that the Core i5-13600K will offer substantially the same configuration as the Core i5-12600K, except for the number of E-Cores (or efficient cores) that practically doubled, going from 4 to 8. 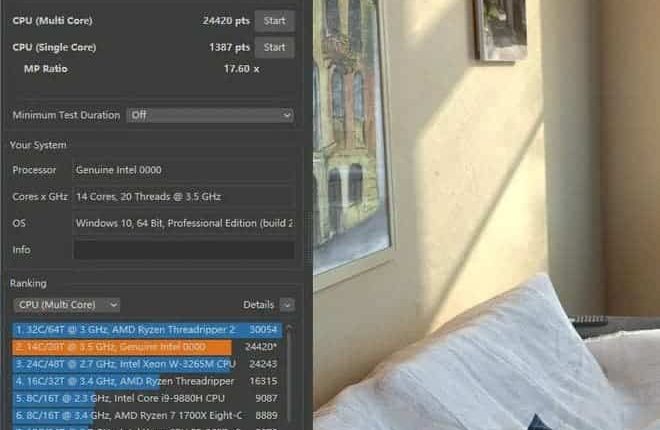 Different speech in single-core where at the moment there seems to be some problem with the Turbo Boost management; which, at first glance, significantly affects the final score. Waiting for further tests, perhaps on a more recent sample; there is also talk of probable consumption which, in the retail version, should not exceed 160 watts. In addition to the increase in the number of cores, Raptor Lake-S should guarantee higher clock rates; along with an increase in the L2 / L3 cache and a faster third level cache; the debut will take place this fall together with the new motherboards with 700 series chipsets, always on LGA 1700 socket.