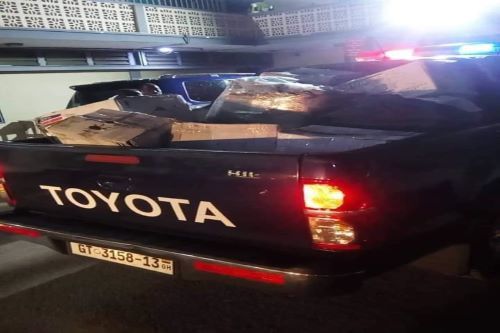 Communications Director of the opposition National Democratic Congress (NDC), Lawyer Sammy Gyamfi has alleged that officials of the Customs Excise and Preventive Service unit at Tema port have “intercepted and impounded 436 pistols and ammunitions” which had been concealed in a consignment of personal effects imported from Turkey. This is as cited by a post he made on Facebook which has since been shared widely by his party faithful.

In a Facebook post cited by Ghana News Avenue, he wrote: “It has come to the attention of the National Democratic Congress (NDC), that a consignment of 436 Pistols and ammunition imported illegally into the country from Turkey, was intercepted and impounded at Tema Port yesternight. The pistols and ammunition which had been concealed in a consignment of personal effects from Turkey were found during physical examination at Custom Officials at the Port and taken to the Tema Habour Police station.”

To support his claim, he attached a snapshot of the impounded weapons in a Pick-up Vehicle and the Police statement of the Clearing Agent that confirm the incident.

However, the NDC communicator claims he has been informed that some “unscrupulous persons are pulling strings to get the impounded items which have been taken back to the Ghana Revenue Authority’s Long Room Armoury at the Tema Port released to them”.

Therefore, while commending the Customs officials for acting swiftly to impound the consignment, he is demanding that a full disclosure on the issue is made and the identity of the “so-called Big Men” scheming to get the consignment released to them made known to Ghanaians.

“While we commend the Customs Excise and Preventive Service unit at Tema port for acting swiftly to impound this consignment, we demand that they update the nation on this worrying development in the spirit of transparency. Ghanaians deserve to know who illegally imported the said pistols and ammunition into the country and for what purpose. More importantly, Ghanaians deserve to know the identity of the so-called “Big Men” who are pulling strings behind the scenes to get the consignment released,” he added.

Lawyer Sammy Gyamfi concluded by appealing to the media to follow the story closely as the weapons posed much danger to the security of the nation should it land in the wrong hands”.