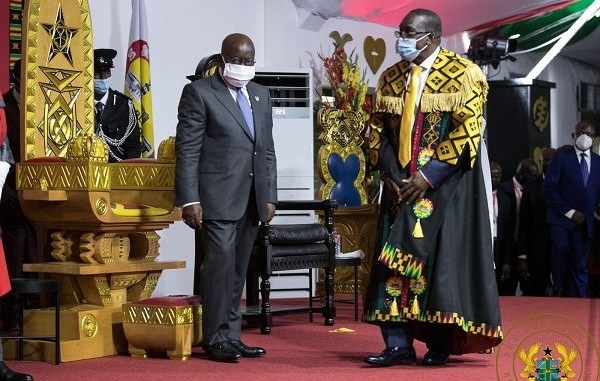 Speaker Alban Bagbin has said he will neither be an errand boy for the executive arm of government nor superintend a weak parliament to frustrate the government.

Speaking in parliament on Thursday, 16 December 2021 about the controversial 2022 budget, Mr Bagbin said: “Let me reiterate my solemn pledge to the people of Ghana, which I canvassed in my first formal communication to this House that I will not superintend a parliament to frustrate government business; but I will equally not preside over a weak house or be tagged as an errand boy of the Executive arm of government.”

“This house is fully focused in discharging its mandate and will do so without any fear or favour, affection or ill-will in ensuring the ultimate best interests of the Ghanaian people are served,” he said.

The budget has been hanging due to heated debate over the proposed 1.75 per cent e-levy.

While the Majority Caucus is in favour of the e-levy and approved it, the Minority Caucus has been against and rejected it.

The two sides have since been trying to find a middle ground.

Mr Bagbin, who recently returned from medical review in Dubai, told the house on Thursday that Finance Minister Ken Ofori-Atta must present the revised budget to the house.

Meanwhile, Majority Leader Osei Kyei-Mensah-Bonsu has said without the proposed 1.75 per cent e-levy, the government cannot maintain the existing roads nor build new ones.

Addressing journalists in Accra on Wednesday, 15 December 2021, the Minister of Parliamentary Affairs said he found it “surprising” that the Minority Caucus and the opposition NDC are fighting the e-levy.

He said the cost of borrowing has “escalated” and the country’s debt-to-GDP ratio has also risen as a result of the COVID-19 pandemic, “so, we must look inward to mobilise resources for the country to develop, to build our roads, to build clinics, health facilities, to build educational facilities, to deliver potable water and one of the ways to do this is by the introduction of e-levy and people say: ‘No, we would not allow you to borrow outside, we will not allow you to also raise revenue from inside this country’”.

The Suame MP observed that the “cost of road construction and road maintenance has escalated over the past 20 years”.

“Why? Because over the past 20 years, the road network of this country has doubled”, he answered.

“So, over just two decades – from the year 2000 to 2021 – the road network has increased by more than 100 per cent”, Mr Kyei-Mensah-Bonsu noted, adding: “We need to maintain them, we need to service them, we need to build new roads”.

“Where do we have the money to maintain them if we don’t mobilise resources from within? Today, as we speak, local road contractors, the government is indebted to them to the tune of about GHS4.5, GHS4.5 billion. We’re not having money to pay them”, he bemoaned.

He added: “The e-levy, we are told – in fact, the Road Fund contributes something but it’s not much; the road tolls, yielding altogether about GHS72 million a year. What is it going to do? But, in the meantime, that section of the road where you have the road tolls, often because they stop there, the roads end up being warped and furrowed. So, you have ridges and furrows at that place”.

“So, every year, you have to maintain that portion of the road. It’s the GHS78 million that you collect that you are going to use some to even maintain those sections of the road. How much is left?” he lamented.

“The e-levy, we are told, is going to yield about GHS8 billion as opposed to GHS78 million. That will yield enough for us to be able to do the roads. Of course, I do know that it’s not everything that is going to be used for the construction of roads but if you have GHS8 billion, GHS9 billion from the e-levy, it’s going to be substantial for you to be able to engage in development programmes and projects. So, the dialogue sessions indicated to us that we needed to do this”, he added.