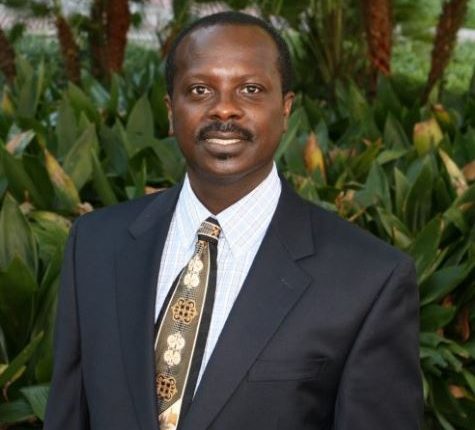 “If lawyers are not paying taxes, arrest and prosecute them”, Kwaku Azar replies Nana Addo

US-based Ghanaian lawyer, Prof. Stephen Kwaku Asare, also known as Prof. Kwaku Azar, says lawyers and other professionals who are not paying taxes must be arrested and prosecuted.

Barely a month ago, the Ghana Revenue Authority (GRA) conducted an exercise which revealed that over 60,000 business professionals, including lawyers, have not been paying their taxes.

President Nana Addo Dankwa Akufo-Addo, speaking at the Ghana Bar Conference in the Upper East Regional capital Bolgatanga, today, September 13, 2021, issued a stern warning to lawyers in the country who are fond of evading taxes.

The President said it was high time the lawyers began honoring their tax obligation or face the full rigors of the law.

“It is embarrassing that lawyers are often on top of the list of those who flout our tax laws and use their expertise to avoid paying taxes. They appear to think, that being members of the learned professions puts them above compliance with everyday civic duties like paying taxes”, Akufo-Addo stated.

“It is sad to say that many lawyers are caught in the phenomenon of tax evasion, as they unjustifiably avoid being caught in the tax net, either by understating their profits or concealing their true incomes. The luxurious lifestyles of certain lawyers, riding in the plushest of vehicles and acquiring top-end properties, are hardly commensurate with the amount of taxes they pay,” the Attorney General and Minister of Justice, Godfred Yeboah Dame, also said at the same event.

But in what appears to be a subtle reply to the President and the Attorney General, Prof. Azar wrote on his Facebook wall, “If lawyers, or other professionals, are not paying taxes, arrest and prosecute them.”

To him, appealing to or warning defaulting lawyers will not make a difference neither will the writing of a new tax law. 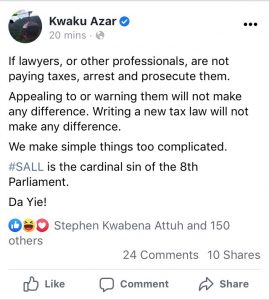